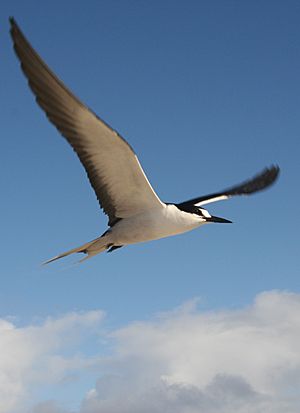 The sooty tern is highly aerial and marine and will spend months flying at sea, returning to land only for breeding.

Seabirds are birds that have adapted so they are better able to live at sea or near it. Many seabirds live at sea, that is, far away from land. They may only come on land to breed. Other seabirds live in colonies on islands. Very often, seabirds use the sea for food, most often fish or shellfish. The first seabirds evolved in the Cretaceous period, and modern seabird families first appeared in the Palaeogene. The similarities between them are examples of convergent evolution. The same environmental problems and feeding niches have resulted in similar adaptations.

Seabirds share a number of adaptations to sea life. They live longer, breed later and have fewer young than other birds. They do spend a great deal of time with their young. Most species nest in colonies. These vary from a few dozen birds to millions. Many species take long annual migrations every year, crossing the equator or circumnavigating the Earth in some cases. They feed both at the ocean's surface and below it, and even feed on each other. Seabirds vary in how much of the year they spend at sea.

All content from Kiddle encyclopedia articles (including the article images and facts) can be freely used under Attribution-ShareAlike license, unless stated otherwise. Cite this article:
Seabird Facts for Kids. Kiddle Encyclopedia.