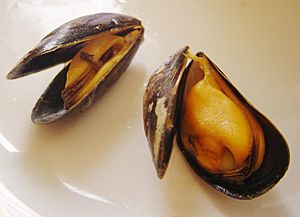 Shellfish is a culinary term for aquatic invertebrates used as food: molluscs, crustaceans, and echinoderms. Both saltwater and freshwater invertebrates are considered shellfish.

Molluscs commonly used as food include the clam, mussel, oyster, winkle, and scallop.

Some crustaceans commonly eaten are the shrimp, prawn, lobster, crayfish, and crab.

Echinoderms are not eaten as commonly as mollusks and crustaceans. In Asia, sea cucumber and sea urchins are eaten.

Edible cephalopods such as squid, octopus, and cuttlefish and terrestrial snails, though all molluscs, are sometimes considered to be shellfish and sometimes not.

The term finfish is sometimes used to distinguish ordinary (vertebrate) fish from shellfish.

Jewish and Islamic dietary laws forbid the eating of shellfish (Those that live on the land, and in the water).

In Japanese cuisine, chefs often use shellfish and their roe. Sushi and sashimi feature both raw and cooked shellfish.

All content from Kiddle encyclopedia articles (including the article images and facts) can be freely used under Attribution-ShareAlike license, unless stated otherwise. Cite this article:
Shellfish Facts for Kids. Kiddle Encyclopedia.