Dendrobranchiata is a suborder of decapod crustaceans, and contains shrimp and prawn.

Dendrobranchiata are commercially fished, and used for cooking. The difference between prawns and shrimp is usually that prawn are larger than shrimp.Prawns are crustaceans similar in appearance to shrimps, but they can be distinguished by the gill structure which is branching in prawns and not in shrimp. The prawn is also related to the crab and the lobster.

Prawns are found in calmer waters were the prawns can nest in the water plants to lay their eggs. Like the shrimp, the prawn does tend to prefer the warmer waters in the tropics but some species of prawn are found in the Northern Hemisphere.

The prawn feeds by filtering nutritious particles out of the water flowing around the prawn, and the prawn is therefore often found on rocks or close to the sea floor.

Prawns are a common source of food for humans around the world, particularly in areas where the prawn exists naturally such as south east Asia. 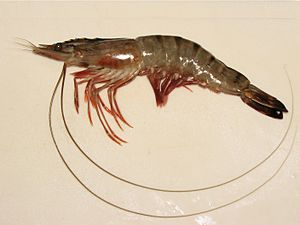 The giant tiger prawn (Penaeus monodon) is an important species for aquaculture.

The terms shrimp and prawn originated in Great Britain. In the use of common names for species, shrimp is applied to smaller species, particularly species that are dorsoventrally depressed (wider than deep) with a shorter rostrum. It is the only term used for species in the family Crangonidae, such as the common shrimp or brown shrimp, Crangon crangon. Prawn is never applied to very small species. It is applied to most of the larger forms, particularly species that are laterally compressed (deeper than wide) and have a long rostrum. However, the terms are not used consistently. For example, some authors refer to Pandalus montagui as an Aesop shrimp while others refer to it as an Aesop prawn.

Commonwealth countries, and Ireland, tend to follow British usage. Some exceptions occur in Australia where some authors refer to small species of Palaemonidae as prawns and call Alpheidae pistol shrimp. Other Australian authors have given the name banded coral shrimp to the prawn-like Stenopus hispidus and listed "the Processidae and Atyidae as shrimps, the Hippolytidae, Alpheidae, Pandalidae and Campylonotoidea as prawns". New Zealand broadly follows British usage. A rule of thumb given by some New Zealand authors states: "In common usage, shrimp are small, some three inches or less in length, taken for food by netting, usually from shallow water. Prawn are larger, up to twelve inches long, taken by trapping and trawling." South Africa and the former British colonies in Asia also seem to generally follow British usage.

All content from Kiddle encyclopedia articles (including the article images and facts) can be freely used under Attribution-ShareAlike license, unless stated otherwise. Cite this article:
Prawn Facts for Kids. Kiddle Encyclopedia.