Sea urchins are the Class Echinoidea of the Phylum Echinodermata. Like the rest of the Echinoderms, literally "spike-skinned", they are entirely marine. They are usually globe-shaped, and protected by calcareous plates and spines. Urchin is an old word for hedgehog, and in many foreign languages these animals are called "sea hedgehogs".

Like other echinoderms they have five-fold symmetry (called pentamerism) and move by means of hundreds of tiny, transparent, adhesive 'tube feet'. The symmetry is not obvious in the living animal, but is easily visible in the dried test.

Sea urchins mostly feed on algae and small animals. They have a special chewing apparatus called Aristotle's lantern, after the Greek philosopher Aristotle who was fascinated by sea urchins. With this apparatus they can scrape organisms stuck to the surface over which the urchin is moving.

The spines are long and sharp in some species, and protect the urchin from predators. The spines inflict a painful wound when they penetrate human skin, but are usually not dangerous. Echinoids also have pincer-like pedicellaria all over their body between the spines. The job of these is to deal with anything (like larvae) settling on the test (outer shell). It is not known if the spines are venomous (unlike the pedicellariae between the spines, which are venomous).

Sea urchins have five jaws with one tooth each. The teeth grow throughout the sea urchin's life. The teeth of the pink sea urchin chip against each other to stay sharp. 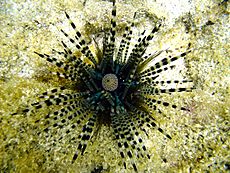 Echinothrix calamaris, a sea urchin with huge banded spines. The sphere, top, middle, is its anus.

Sea urchins feed mainly on algae, but can also feed on sea cucumbers, and a wide range of invertebrates such as mussels, polychaetes, sponges, brittle stars and crinoids. Sea urchins are one of the favorite foods of sea otters and wolf eels. Without predators to eat them, urchins breed in large numbers and eat almost all the nearby kelp, creating an urchin barren, devoid of macroalgae and associated fauna. Sea otters have re-entered British Columbia, dramatically improving coastal ecosystem health by eating sea urchins.

The first echinoid fossils are from the Lower Ordovician period. The earliest forms had flexible tests, with plates that could slide over each other. Echinoids were a relatively unimportant part of the biota in the Palaeozoic. Only one group survived the P/Tr extinction event to form the basis of all later echinoids. The group which survived into the Triassic, the Cidaroids, radiated into all other modern groups, which are known as the Euechinoids.

The break with perfect symmetry, which happened in the Jurassic, gave them definite front and back ends. This opened up new habitats, in particular, the burrowing habitat. Sand dollars and heart urchins have been highly successful. The living echinoids are now important members of the biota, especially in shallow and in-shore waters.

Some humans eat the reproductive organs of sea urchins (which they call roe). This is popular in Korea. In Japan, this kind of sushi is called uni. 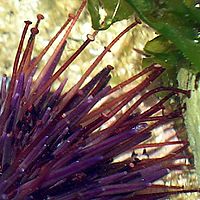 Tube feet in action: how a sea urchin moves

In the Pacific, bunches of heavy spines from slate-pencil urchins (Heterocentrotus species) were used as abrasion tools for shipbuilding. 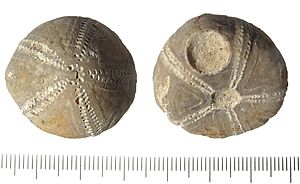 A fossil sea urchin found on a Middle Saxon site in Lincolnshire, thought to have been used as an amulet

Some species of sea urchins, such as the slate pencil urchin (Eucidaris tribuloides), are commonly sold in aquarium stores. Some species are effective at controlling filamentous algae, and they make good additions to an invertebrate tank.

A folk tradition in Denmark and southern England imagined sea urchin fossils to be thunderbolts, able to ward off harm by lightning or by witchcraft, as an apotropaic symbol. Another version supposed they were petrified eggs of snakes, able to protect against heart and liver disease, poisons, and injury in battle, and accordingly they were carried as amulets. These were, according to the legend, created by magic from foam made by the snakes at midsummer.

All content from Kiddle encyclopedia articles (including the article images and facts) can be freely used under Attribution-ShareAlike license, unless stated otherwise. Cite this article:
Sea urchin Facts for Kids. Kiddle Encyclopedia.