A cuttlebone from a sepia 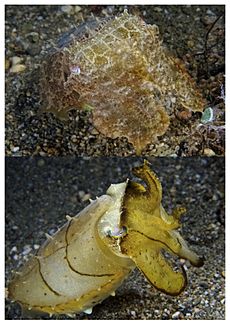 This Broadclub Cuttlefish (Sepia latimanus) can go from camouflage tans and browns (top) to yellow with dark highlights (bottom) in less than a second. 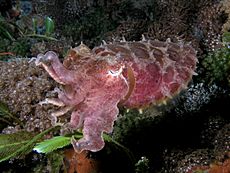 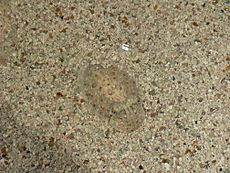 An infant cuttlefish protects itself with camouflage

Cuttlefish are marine Cephalopod molluscs. They belong to the same class as squid, octopuses and the nautilus.

Cuttlefish have an internal shell (called a cuttlebone), large eyes, and eight arms and two tentacles furnished with finely toothed suckers, with which they grab their prey.

Cuttlefish eat small molluscs, crabs, shrimp, fish and other cuttlefish. Various sharks and fish prey on them. They live about 1 to 2 years.

Cuttlefish have an internal cuttlebone, made of calcium carbonate. It is porous, full of small holes, The buoyancy of the cuttlebone can change, allowing the cuttlefish to go lower or higher by changing the amount of gas and liquid in its chambers. The cuttlebone of each species has a distinct shape, size, and pattern of ridges or texture. Cuttlebones are used by jewellers and silversmiths as moulds for casting small objects. They are probably better known today as the material given to pet birds as a source of calcium. The cuttlebone is only found in cuttlefish, and is one of the features that makes them different from squid and other molluscs.

Cuttlefish are sometimes called the chameleon of the sea because they are able to change their skin color. Their skin can flash a colorful pattern in order to communicate with other cuttlefish and to camouflage them from predators. This color-changing function is produced by groups of red, yellow, brown, and black pigmented chromatophores above a layer of reflective iridophores and leucophores. These are all in the cuttlefish's skin, and work together to change its colour. There are up to 200 of these special pigment cells per square millimeter.

The pigmented chromatophores have a sac of pigment and a large membrane that is folded when retracted. There are 6-20 small muscle cells on the sides which can contract to squash the elastic sac into a disc against the skin.

Iridophores are plates of chitin or protein, which can reflect light. They are responsible for the metallic blues, greens, golds, and silvers often seen on cuttlefish. All of these cells can be used in combinations. As well as being able to influence the colour of the light that reflects off their skin, cuttlefish can also affect the light's polarization, which can be used to signal to other animals which sense polarization.

Cuttlefish eyes are among the most developed in the animal kingdom. The way cephalopod eyes develop is fundamentally different from that of vertebrates like humans, but the way they work is rather similar. The similarity between cephalopod and vertebrate eyes is an examples of convergent evolution. Although they cannot see color, they can perceive the polarization of light, which improves their ability to see contrast. They have two spots of concentrated sensor cells on their retina (known as fovea), one to look more forward, and one to look more backwards. The lenses, instead of being reshaped as they are in humans, are instead pulled around by reshaping the entire eye in order to change focus. 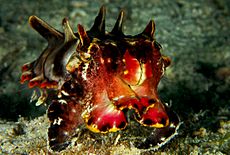 The blood of a cuttlefish is an unusual shade of green-blue because it uses the copper-containing protein haemocyanin to carry oxygen instead of the red iron-containing protein haemoglobin that is found in vertebrates. This is similar to the blood of arthropods. Haemocyanin is not so good at carrying oxygen as is haemoglobin. The blood is pumped by three separate 'hearts'. Two of these are used for pumping blood to the cuttlefish's pair of gills (one heart for each gill), and the third for pumping blood around the rest of the body.

Cuttlefish have inks like squid and octopuses. As with squid, the ink is a defensive tool, squirted out to cover its retreat in the case of danger. This ink was formerly an important dye, called sepia. Today artificial (not natural) dyes have replaced natural sepia.

Cuttlefish are caught for food in Mediterranean, and East Asian cultures. Although squid is more popular as a restaurant dish all over the world, in East Asia dried cuttlefish is highly popular.

Cuttlefish is popular in Italy and Croatia, where it is used in Risotto Nero. "Nero" means 'black', which is the colour the rice turns because of the cuttlefish ink. Spanish cuisine often uses cuttlefish and squid ink for cooking due to the marine flavor and smoothness that it provides to the meals and it is included in dishes such as rice, pasta and fish stews.

Cuttlefish made their most important literary appearance in the title of Eugenio Montale's collection of poetry called Cuttlefish Bones (Ossi di seppia), published in Turin in 1925. Montale was awarded the Nobel Prize for Literature in 1975.

There are over 120 species of living cuttlefish, in 5 genera. Sepiadariidae contains seven species and two genera; all the rest are in the Sepiidae.

All content from Kiddle encyclopedia articles (including the article images and facts) can be freely used under Attribution-ShareAlike license, unless stated otherwise. Cite this article:
Cuttlefish Facts for Kids. Kiddle Encyclopedia.