Gills seen on a newt (a type of amphibian) 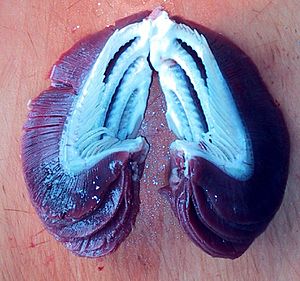 Gills of a fish

Fish and frog gills are hidden on the sides of their heads. Sharks have many gills slits on their necks. Baby salamanders have gills that stick out like leaves from their heads.

In mushrooms, gills are the spore-bearing structure in agarics (gilled mushrooms).while fish and some young amphibians use them to get oxygen others breath.

Some insects that live in water have a plastron, which is a kind of gill. It is a patch of special hairs that keeps the water away from the insect's spiracles. This allows them to continue to take in oxygen and remove carbon dioxide while they are under water. 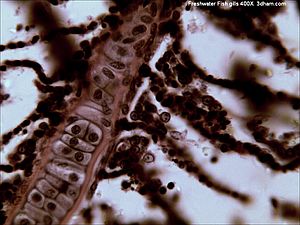 The gills of vertebrates typically develop in the walls of the pharynx, along a series of gill slits opening to the exterior. The gills are composed of comb-like filaments, the gill lamellae, which help increase their surface area for oxygen exchange.

When a fish breathes, it draws in a mouthful of water at regular intervals. Then it draws the sides of its throat together, forcing the water through the gill openings, so that it passes over the gills to the outside. Fish gill slits may be the evolutionary ancestors of the tonsils, thymus gland, and Eustachian tubes, as well as many other structures derived from the embryonic branchial pouches. 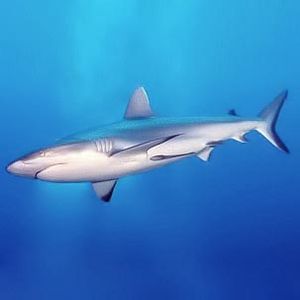 Sharks and rays typically have five pairs of gill slits that open directly to the outside of the body, though some more primitive sharks have six or seven pairs. Adjacent slits are separated by a cartilaginous gill arch from which projects a long sheet-like septum, partly supported by a further piece of cartilage called the gill ray. The individual lamellae of the gills lie on either side of the septum. The base of the arch may also support gill rakers, small projecting elements that help to filter food from the water.

A smaller opening, the spiracle, lies in front of the first gill slit. This bears a small pseudobranch that resembles a gill in structure, but only receives blood already oxygenated by the true gills. The spiracle is thought to be homologous to the ear opening in higher vertebrates.

Most sharks rely on ram ventilation, forcing water into the mouth and over the gills by rapidly swimming forward. In slow-moving or bottom dwelling species, especially among skates and rays, the spiracle may be enlarged, and the fish breathes by sucking water through this opening, instead of through the mouth.

Chimaeras differ from other cartilagenous fish, having lost both the spiracle and the fifth gill slit. The remaining slits are covered by an operculum, developed from the septum of the gill arch in front of the first gill. 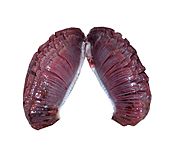 The red gills inside a detached tuna head (viewed from behind)

In bony fish, the gills lie in a branchial chamber covered by a bony operculum. The great majority of bony fish species have five pairs of gills, although a few have lost some over the course of evolution. The operculum can be important in adjusting the pressure of water inside of the pharynx to allow proper ventilation of the gills, so that bony fish do not have to rely on ram ventilation (and hence near constant motion) to breathe. Valves inside the mouth keep the water from escaping.

The gill arches of bony fish typically have no septum, so that the gills alone project from the arch, supported by individual gill rays. Some species retain gill rakers. Though all but the most primitive bony fish lack a spiracle, the pseudobranch associated with it often remains, being located at the base of the operculum. This is, however, often greatly reduced, consisting of a small mass of cells without any remaining gill-like structure.

Marine teleosts also use gills to excrete electrolytes. The gills' large surface area tends to create a problem for fish that seek to regulate the osmolarity of their internal fluids. Saltwater is less dilute than these internal fluids, so saltwater fish lose large quantities of water osmotically through their gills. To regain the water, they drink large amounts of seawater and excrete the salt. Freshwater is more dilute than the internal fluids of fish, however, so freshwater fish gain water osmotically through their gills.

An Alpine newt larva showing the external gills, which flare just behind the head

Lampreys and hagfish do not have gill slits as such. Instead, the gills are contained in spherical pouches, with a circular opening to the outside. Like the gill slits of higher fish, each pouch contains two gills. In some cases, the openings may be fused together, effectively forming an operculum. Lampreys have seven pairs of pouches, while hagfishes may have six to fourteen, depending on the species. In the hagfish, the pouches connect with the pharynx internally. In adult lampreys, a separate respiratory tube develops beneath the pharynx proper, separating food and water from respiration by closing a valve at its anterior end.

Tadpoles of amphibians have from three to five gill slits that don't contain actual gills. There is usually no spiracle or true operculum, though many species have an operculum-like structure. Instead of internal gills, they develop three feathery external gills that grow from the outer surface of the gill arches. Sometimes adults retain these, but they usually disappear at metamorphosis. Lungfish larvae also have external gills, as does the primitive ray-finned fish Polypterus, though the latter has a structure different than amphibians. 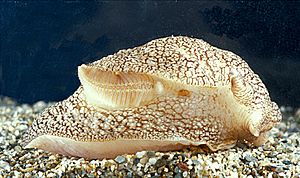 A live individual of the sea slug Pleurobranchaea meckelii. The gill (or ctenidium) is visible in this view of the right-hand side of the animal

Respiration in the Echinodermata (includes starfish and sea urchins) is carried out using a very primitive version of gills called papulae. These thin protuberances on the surface of the body contain diverticula of the water vascular system. Crustaceans, molluscs, and some insects have gills that are tufted or plate-like structures at the surface of the body. 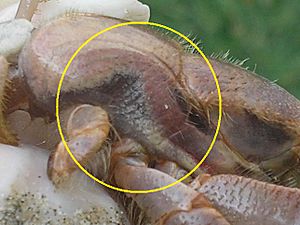 The gills of other insects are tracheal, and also include both thin plates and tufted structures, and, in the larval dragon fly, the wall of the caudal end of the alimentary tract (rectum) is richly supplied with tracheae as a rectal gill. Water pumped into and out of the rectum provides oxygen to the closed tracheae. Aquatic insects use a tracheal gill, which contains air tubes. The oxygen in these tubes is renewed through the gills.

All content from Kiddle encyclopedia articles (including the article images and facts) can be freely used under Attribution-ShareAlike license, unless stated otherwise. Cite this article:
Gill Facts for Kids. Kiddle Encyclopedia.