Frogs are amphibians of the order Anura. There is not much difference between frogs and toads, and they are not classified separately. This is because the toad lifestyle, with its dry, rough, skin, is an adaptation to living in drier habitats. The toad form has evolved a number of times independently, an example of convergent evolution.

Frogs can live on land and in fresh water. They cannot survive in salt water. Their development is by metamorphosis. They usually hatch as tadpoles from eggs, which are laid by a female frog. The eggs are called frogspawn. Tadpoles have tails and gills. The next stage, the "froglet," develops lungs to breathe air instead of gills, but still have tails. The fully grown frog has long legs and no tail.

Adult frogs can jump with their legs. They have long tongues that they use to catch bugs. They make a sound called a croak. Some species live in trees, and some types of frog are protected by being poisonous. Frogs live all over the world. If a foreign species of frogs is introduced to another country, the local ecosystem might be affected.

Frogs are members of the class Lissamphibia, the only class of amphibia which has survived to the present day. 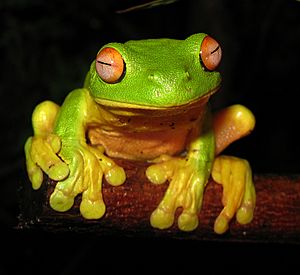 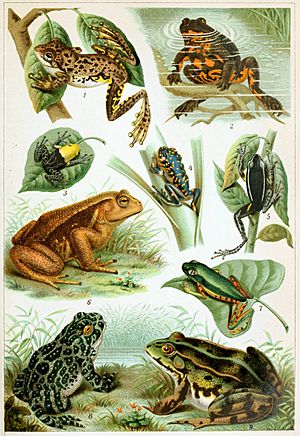 Frogs are cold blooded animals. This means that they need heat to keep up their body temperature. If the temperature outside is cold, amphibians will not be active. Amphibians can get heat from the sun, usually indirectly: whereas reptiles can bask in the sun, amphibia usually do not, because it dries their skin. Some frogs aestivate during winter or during droughts. They usually look for underground place to aestivate. These include burrowing in muds and holes. They survive by getting oxygen through their skin. They come out when the weather outside is favourable.

The structure of the feet and legs varies greatly among frog species, depending in part on whether they live primarily on the ground, in water, in trees or in burrows. Frogs must be able to move quickly through their environment to catch prey and escape predators, and numerous adaptations help them to do so. Most frogs are either proficient at jumping or are descended from ancestors that were.

The call or croak of a frog is unique to its species. Frogs create this sound by passing air through the larynx in the throat. In most calling frogs, the sound is amplified by one or more vocal sacs. Some frog calls are so loud that they can be heard up to a mile away, the main reason for calling is to allow male frogs to attract a mate. 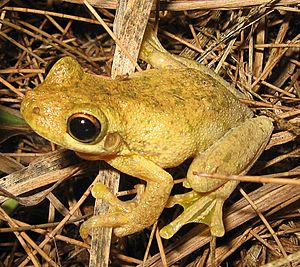 Frogs have skin with no scales or hair. They can take in oxygen from either water or air. Mucus that helps their skin to stay wet and slippery. Many amphibians have toxic skin. They have secretions which makes their skin poisonous.

Many frogs are semi-aquatic. They may live on both land and in water, and in any event prefer damp places. These include ponds, swamps, rivers and lakes. Most adults live where they grew up. Most amphibians lay their eggs in foam nests. Frogs can hear both in the air and below water.

Camouflage is a common defensive mechanism in frogs. Most camouflaged frogs are nocturnal; during the day, they seek out a position where they can blend into the background and remain undetected. 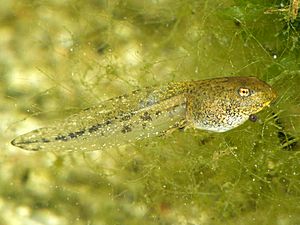 Larva of the common frog Rana temporaria a day before metamorphosis

At the end of the tadpole stage, a frog undergoes metamorphosis in which its body makes a sudden transition into the adult form. This metamorphosis typically lasts only 24 hours, and is initiated by production of the hormone thyroxine. This causes different tissues to develop in different ways. 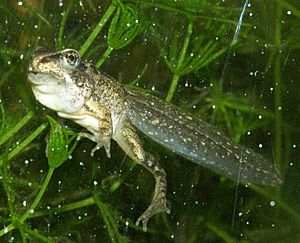 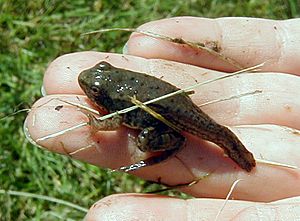 The principal changes that take place include the development of the lungs and the disappearance of the gills and gill pouch, making the front legs visible. The lower jaw transforms into the big mandible of the carnivorous adult, and the long, spiral gut of the herbivorous tadpole is replaced by the typical short gut of a predator. The nervous system becomes adapted for hearing and vision, and for new methods of movement and feeding.

The eyes are repositioned higher up on the head and the eyelids and associated glands are formed. The eardrum, middle ear, and inner ear are developed. The skin becomes thicker and tougher and skin glands are developed. The final stage is the disappearance of the tail, but this takes place rather later, the tissue being used to produce a spurt of growth in the limbs. Frogs are at their most vulnerable to predators when they are undergoing metamorphosis. At this time, the tail is being lost and movement by means of limbs is only just becoming established. 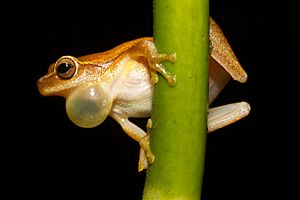 A male displaying its vocal sac during its call

However, a new species has been discovered in Sulawasi, Indonesia, which gives birth to live tadpoles. The frog is now known as Limnonectes larvaepartus. 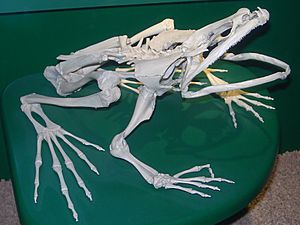 The Limnonectes family are known as 'fanged frogs' because of twin projections on their lower jaws that are used in fighting. Sulawesi is an island which is rapidly losing its forests. The tropical forest is where this frog lives. 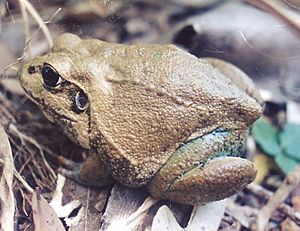 Frogs are widespread, and have adapted to many climates, even deserts. They rely on specific adaptations to survive. Members of the genus Cyclorana live in the Australian central desert. They bury themselves underground where they create a waterproof cocoon in which to aestivate during dry periods. Once it rains, they come out, find a temporary pool, and breed. Egg and tadpole development is very fast in comparison to those of most other frogs, so breeding can be completed before the pond dries up.

Some frog species are adapted to a cold environment. The wood frog (Rana sylvatica), whose habitat extends into the Arctic Circle, buries itself in the ground during winter. Although much of its body freezes during this time, it maintains a high concentration of glucose in its vital organs, which protects them from damage. 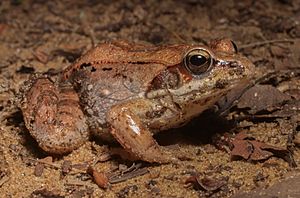 There are a number of tiny tree frogs which develop from eggs laid in water pools on tropical leaves many meters above the ground. Most of these species do not come to the ground except to mate. Tree frogs have evolved a number of times, but they all have almost identical adaptations. Many millions of years of convergent evolution have resulted in almost identical morphology and habits.

Overall, frogs are a successful and widespread group. There are about 4,800 recorded species, which is over 85% of living amphibian species. They are one of the five most diverse vertebrate orders. 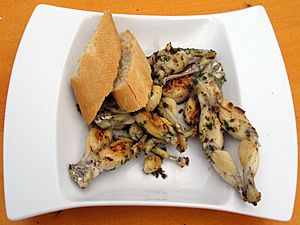 Frog legs are eaten by humans in many parts of the world. French cuisses de grenouille or frog legs dish is a traditional dish. The dish is also common in French-speaking parts of Louisiana, particularly the Cajun areas of Southern Louisiana as well as New Orleans, United States. In Asia, frog legs are consumed in China, Vietnam, Thailand and Indonesia.

Chinese edible frog and pig frogs are farmed and consumed on a large scale in some areas of China. Frog legs are part of Chinese Sichuan and Cantonese cuisine. In Indonesia, frog-leg soup is known as swikee or swike. Indonesia is the world's largest exporter of frog meat, exporting more than 5,000 tonnes of frog meat each year, mostly to France, Belgium and Luxembourg. 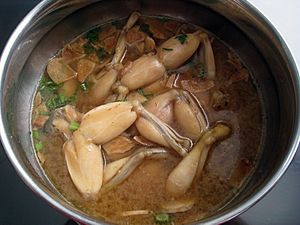 Originally, they were supplied from local wild populations, but over-exploitation led to a reduction in the size of the supply. This resulted in the development of frog farming and a global trade in frogs. The main importing countries are France, Belgium, Luxembourg, and the United States, while the chief exporting nations are Indonesia and China. The annual global trade in the American bullfrog, mostly farmed in China, varies between 1200 and 2400 tonnes.

The mountain chicken frog, so-called as it tastes of chicken is now endangered, in part due to human consumption and was a major food choice of the Dominicans.

All content from Kiddle encyclopedia articles (including the article images and facts) can be freely used under Attribution-ShareAlike license, unless stated otherwise. Cite this article:
Frog Facts for Kids. Kiddle Encyclopedia.