The common toad or European toad (Bufo bufo) is an amphibian. They are found in most of Europe, except for Ireland, Iceland and some Mediterranean islands. The toad usually lies hidden during the day. It becomes active at dusk and spends the night hunting for the invertebrates on which it feeds. It moves with a slow ungainly walk or a short jump. It has a greyish brown skin covered with wart-like lumps.

The toads in this genus are known as true toads. They have no teeth, a dry warty skin and horizontal pupils to the eyes. 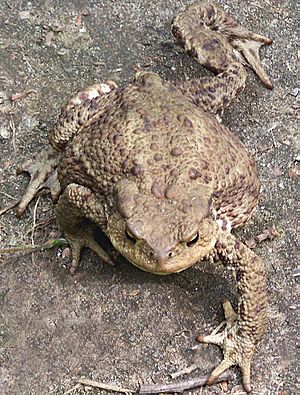 The common toad can grow to about 15 cm (6 in) in length. Females grow larger than males. Those in the south tend to be larger than ones in the north. The head is broad with a wide mouth. The nose has two small nostrils. There are no teeth. The large, protruding eyes have yellow or copper coloured irises and horizontal slit-shaped pupils. They have a noxious substance called bufotoxin. It is used to keep away predators. The head joins the body without a noticeable neck. There is no external vocal sac. The body is broad and squat. The front limbs are short with the toes of the front feet turning inwards. At breeding time, the male gets nuptial pads on the first three fingers. These are to hold the female. The back legs are short and the back feet have long, unwebbed toes. There is no tail. The skin is dry and covered with small warts. The colour is brown, olive-brown or greyish-brown. Sometimes it is partly blotched or banded with a darker shade. The common toad tends to be sexually dimorphic. The females are browner and the males greyer.

Common toads can live for many years. They have lived for fifty years in captivity. In the wild, common toads are thought to live for about ten to twelve years. Their age can be found by counting the number of yearly growth rings in the bones of their phalanges. 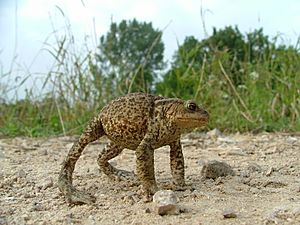 The common toad usually moves by walking rather slowly or in short jumps using all four legs. It spends the day hiding. It comes out at dusk. It may travel some distance in the dark while hunting. It is most active in wet weather. By morning it has returned to its base. It may live in the same place for several months. It has a large appetite and eats woodlice, slugs, beetles, caterpillars, flies, worms and even small mice. Small, fast moving prey may be caught by a flick of the tongue. Larger items are grabbed with the jaws. Having no teeth, it swallows food whole in a series of gulps. It will try to eat any small, dark coloured, moving object it encounters at night. A research study showed that it would snap at a moving 1 cm (0.4 in) piece of black paper as if it were prey. It would ignore a larger moving piece. On occasion, the common toad sheds its skin which comes away in tattered pieces. The skin is then eaten. 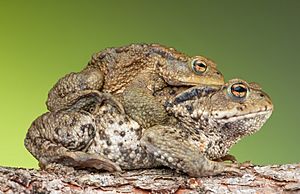 When attacked, the common toad puffs up its body and stands with its back end raised and its head lowered. Its main means of defence is a foul tasting secretion. It has a bufotoxin called bufagin and is enough to keep away many predators. Grass snakes seem to be unaffected by it. Other predators of adult toads include hedgehogs, rats and mink, and even domestic cats. Birds that feed on toads include herons, crows and birds of prey. The tadpoles also have noxious substances which keep fishes from eating them but not the great crested newt. Aquatic invertebrates that feed on toad tadpoles include dragonfly larvae, diving beetles and water boatmen. These usually avoid the noxious secretion by puncturing the tadpole's skin and sucking out its juices.

A parasitic fly, Lucilia bufonivora, attacks adult common toads. It lays its eggs on the toad's skin. When these hatch, the larvae crawl into the toad's nostrils and eat its flesh. 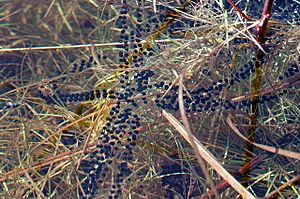 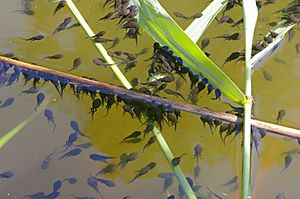 Tadpoles of common toad, some with hind legs

The common toad comes out of hibernation in spring. Large numbers of toads move towards the breeding ponds. The toads meet on certain ponds that they favour. Adults use the same pond year after year. Over 80% of males marked as juveniles have been found to return to the pond at which they were spawned.

The males arrive first and stay for several weeks. The females only stay long enough to mate and spawn. Rather than fighting for the right to mate with a female, male toads use the pitch of their voice. Croaking gives a sign of body size and prowess. Fights do sometimes happen. Male toads outnumber female toads at breeding ponds.

The males mount on the females' backs. They hold the females with their front limbs in a grip called amplexus. The males are very enthusiastic. They will try to grasp fish or inanimate objects and often mount on the backs of other males. Sometimes several toads form a heap, each male trying to grasp the female at the base. It is a stressful period and deaths are high among breeding toads. A successful male stays in amplexus for several days. The female lays a long, double string of small black eggs. He fertilises them with his sperm. The egg strings may have 3,000 to 6,000 eggs and be 3 to 4.5 metres (10 to 15 ft) in length. They get tangled in plant stalks.

The strings of eggs absorb water and swell in size. Small tadpoles hatch out after two to three weeks. At first they hold onto the remains of the strings and feed on the jelly. They later attach themselves to the underside of the leaves of water weed before becoming free swimming. The tadpoles look like those of the common frog (Rana temporaria). They are a darker colour, being blackish above and dark grey below. They can be told apart from the tadpoles of other species by the fact that the mouth is the same width as the space between the eyes, and this is twice as large as the distance between the nostrils. Over a few weeks their legs develop and their tail slowly gets reabsorbed. By twelve weeks of age, they are small toads measuring about 1.5 cm (0.6 in) long and ready to leave the pond.

The common toad reaches maturity at three to seven years.

The IUCN Red List of Threatened Species says the common toad is of Least Concern. This is because it lives in many areas and is common in those areas. It is not threatened very much by habitat loss. It can live in many different areas. Chytridiomycosis, an infectious disease of amphibians, has been reported in common toads in Spain and the United Kingdom. This may affect some populations.

The toad has long been thought to be an animal of ill omen or a connection to the other world. This may be because it is at home both on land and in the water. It may cause people to not like it because of its blackish, warty skin, its slow movements and the way it comes from some dark hole.

One of the earliest references to toads as being linked to the forces of darkness was when Zoroaster said in 600 BC that all toads should be killed. In Europe in the Middle Ages, the toad was associated with the Devil, whose coat-of-arms has three toads on it. It was thought that the toad could poison people. It was also thought that it was the witch's familiar and thus had magical powers. In France it was thought that witches could be found because they were marked by a toad's foot somewhere on their body. In Dorset it was believed that if one found a toad in the house it should be removed without harming it or the householder would face the wrath of the witch whose familiar it was. In some areas, the finding of a toad in a house was seen as evidence that a witch was present. The saliva of the toad was thought to be poisonous. It was believed that it could spit or vomit poisonous fire. It was thought unlucky for a toad to jump over one's foot and in some regions, this was a sign of death. Toads were associated with devils and demons and in "Paradise Lost". John Milton showed Satan as a toad when he poured poison into Eve's ear. The First Witch in Shakespeare's Macbeth gave instructions on using a toad in the making of spells:

The toad is also associated with female fecundity. Models of toads were left at shrines by women who wanted to conceive. In Romania it was believed that someone who killed a toad was able to kill their own mother. In Scottish folklore it was said that the tongue of a toad, carried by a man in his breast pocket, would let him have his way with any woman. It was also believed that there was a jewel inside a toad's head called a "toadstone". It was said that when worn as a necklace or ring would warn the wearer of attempts to poison them. Shakespeare mentioned this in As you like it:

Touching a toad has long been thought to cause warts. This has been shown to be a myth and warts are actually caused by the human papillomavirus. They are transferred by direct contact from person to person.

Mr. Toad Esq. is one of the main characters in the children's novel, The Wind in the Willows, by Kenneth Grahame. This has been dramatized by several authors including A. A. Milne who called his play Toad of Toad Hall. Mr Toad is a very conceited,anthropomorphic toad.

All content from Kiddle encyclopedia articles (including the article images and facts) can be freely used under Attribution-ShareAlike license, unless stated otherwise. Cite this article:
Common toad Facts for Kids. Kiddle Encyclopedia.