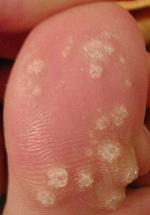 Warts on the big toe 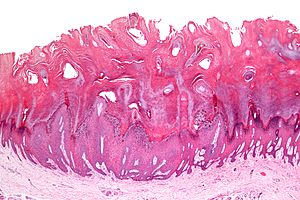 A common wart under the microscope

The virus infects skin cells; if these skin cells move to other areas, new warts can grow there. Warts contain tissue that bleeds easily. A bleeding of this tissue allows the wart to spread to other places. In general, coming in contact with infected tissue spreads the infection.

There are different ways of getting rid of a wart:

There are different types of warts, caused by different HPV viruses:

Getting rid of warts

There are different ways of getting rid of a wart:

All content from Kiddle encyclopedia articles (including the article images and facts) can be freely used under Attribution-ShareAlike license, unless stated otherwise. Cite this article:
Wart Facts for Kids. Kiddle Encyclopedia.