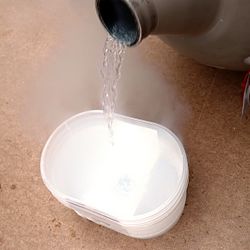 Liquid nitrogen is nitrogen at a very low temperature. It is usually produced by a process known as fractional distillation of air. At atmospheric pressure (normal pressure) nitrogen boils at −196 °C (77 K; −321 °F). Nitrogen was first made into a liquid at Jagiellonian University on 15 April 1883. Zygmunt Wróblewski and Karol Olszewski were the first scientists to liquefy nitrogen, oxygen and carbon dioxide. During World War II the production of liquid nitrogen became common. This lowered the cost to produce it. After the war new uses were found for liquid gases. Liquid nitrogen became a major gas in the US.

Liquid nitrogen has a variety of uses, as it is easy to transport, and compact.

All content from Kiddle encyclopedia articles (including the article images and facts) can be freely used under Attribution-ShareAlike license, unless stated otherwise. Cite this article:
Liquid nitrogen Facts for Kids. Kiddle Encyclopedia.