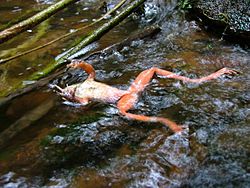 The disease in its epizootic form was first discovered in 1993 in dead and dying frogs in Queensland, Australia. It had been present in the country since at least 1978 and is widespread across Australia. It is also found in Africa, the Americas, Europe, New Zealand, and Oceania.

The fungus has been detected in four areas of Australia—the east coast, Adelaide, south-west Western Australia and the Kimberley and is probably present elsewhere.

Large-scale international trade in living African clawed frogs began more than 60 years ago. If Batrachochytrium originated in Africa, it has been theorized that the African clawed frog was the vector of the initial spread out of the continent. The earliest documented case of the disease chytridiomycosis was an American bullfrog (Rana catesbeiana) collected in 1978. It is still not clear if it is a new emergent pathogen or if it is an old pathogen with recently increased virulence. 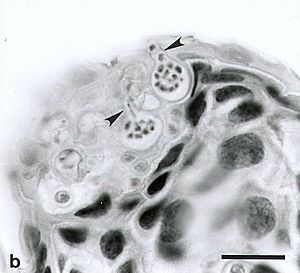 Amphibians infected with B. dendrobatidis have been known to show many different clinical signs. Perhaps the earliest sign of infection is anorexia, occurring as quickly as 8 days after being exposed . Individuals infected are also commonly found in a lethargic state, characterized by slow movements, and refuse to move when stimulated. Excessive shedding of skin is seen in most frog species affected by B. dendrobatidis. These pieces of shed skin are described as opaque, gray-white, and tan. Some of these patches of skin are also found adhered to the skin of the amphibians. These signs of infection are often seen 12–15 days following exposure. The most typical symptom of chytridiomycosis is thickening of skin, which promptly leads to the death of the infected individuals because those individuals cannot take in the proper nutrients, release toxins, or, in some cases, breathe. 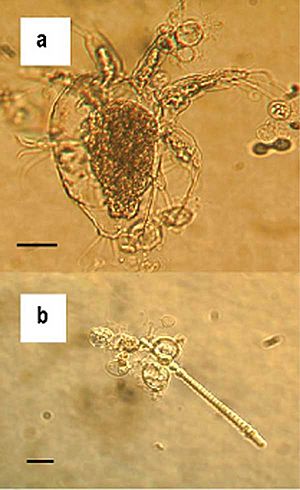 Zoosporangia of Batrachochytrium dendrobatidis strain 98-1810/3 visible as transparent spherical bodies growing in lake water on (a) freshwater arthropod and (b) algae.

Due to the fungus' immense impact on amphibian populations, considerable research has been undertaken to devise methods to combat its proliferation in the wild.

Understanding the interactions of microbial communities present on amphibians’ skin with fungal species in the environment can reveal why certain amphibians, such as the frog Rana muscosa, are susceptible to the fatal effects of B. dendrobatidis and why others, such as the salamander Hemidactylium scutatum, are able to coexist with the fungus.

One study has postulated that the water flea Daphnia magna eats the spores of the fungus.

The use of antifungals and heat-induced therapy has been suggested as a treatment of B. dendrobatidis. However, some of these antifungals may cause adverse skin effects on certain species of frogs. And although we do use them to treat species that are infected by chytridiomycosis, the infection never fully eradicates.

This becomes a difficult situation because without treatment, frogs will suffer from limb deformities and even death, but may also suffer skin abnormalities with treatment. Treatment of chytridiomycosis isn’t always successful, and some frogs are not able to handle the treatment process. It is important to consult with a veterinarian before treating frogs that suffer from chytridiomycosis.

An Archey's frog was successfully cured of chytridiomycosis by applying chloramphenicol topically. However, the potential risks of using antifungal drugs on individuals are high.

All content from Kiddle encyclopedia articles (including the article images and facts) can be freely used under Attribution-ShareAlike license, unless stated otherwise. Cite this article:
Chytridiomycosis Facts for Kids. Kiddle Encyclopedia.