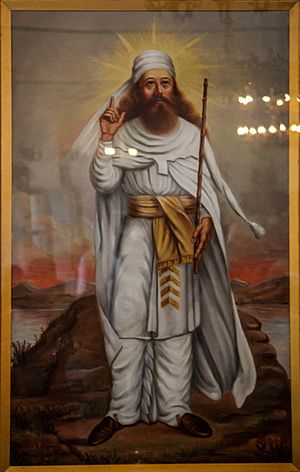 Zoroaster, or Zarathushtra, was an ancient prophet who lived in Persia. He founded a religion named Zoroastrianism. This religion has a long history. It was the national religion of Sassanid Empire of ancient Iran. In Persian language, the name takes the form of Zartosht.

Most scholars agree that Zoroaster was a real person who lived long ago. No one is certain about the time when he lived. One estimate is that he lived about 3200 years ago, around 1200 BC. Some other estimates are that Zarathushtra may have lived anywhere between the 18th century BC and the 6th century BC.

All content from Kiddle encyclopedia articles (including the article images and facts) can be freely used under Attribution-ShareAlike license, unless stated otherwise. Cite this article:
Zoroaster Facts for Kids. Kiddle Encyclopedia.