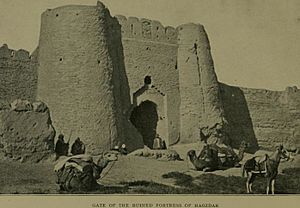 The gates of Haozdar, in Sistan

Sistan was once the homeland of Sakas, a Scythian tribe of Iranic origin. The Saffarids, one of the early Iranian dynasties of the Islamic era, were first from Sistan.

All content from Kiddle encyclopedia articles (including the article images and facts) can be freely used under Attribution-ShareAlike license, unless stated otherwise. Cite this article:
Sistan Facts for Kids. Kiddle Encyclopedia.