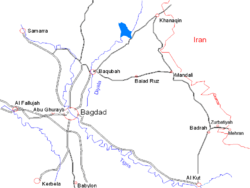 Sāmarrā (Arabic: سامراء‎code: ar is deprecated ) is a town in Iraq. It is on the east bank of the Tigris in the Salah ad Din Governorate, 125 km north of Baghdad. In 2003, the town had an estimated population of 348,700 people.

Samarra is a city of culture and heritage. Samarra is home to the Malwiya Mosque Minerat. People from Samarra are known for looking different in physical appearance to other Iraqis. They tend to have lighter skin, hair, eyes and have more caucasian looking characteristics.

All content from Kiddle encyclopedia articles (including the article images and facts) can be freely used under Attribution-ShareAlike license, unless stated otherwise. Cite this article:
Samarra Facts for Kids. Kiddle Encyclopedia.