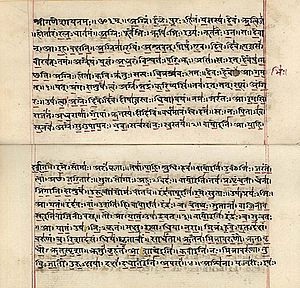 'Rigveda' is an ancient Indian religious book. It is counted as one of the four sacred Hindu writings, which are called Vedas. It is one of the world's oldest religious writings. It is also one of the oldest writings in an Indo-European language. Rigveda is very important to Hindus, especially Hindus in India and Nepal. It words are said during prayers and religious gatherings.

Rig Veda mainly contains various hymns for praying to Vedic Gods such as Agni (Fire God), Indra (The lord of Heavens), Mitra, Varuna (Water God), Surya (Sun God) etc. These hymns are called Riks. Hence the Veda is called Rik-Veda or RigVeda. This writing consists of 10 writings. The Rigveda has 1,028 hymns and 10,600 verses.

All content from Kiddle encyclopedia articles (including the article images and facts) can be freely used under Attribution-ShareAlike license, unless stated otherwise. Cite this article:
Rigveda Facts for Kids. Kiddle Encyclopedia.