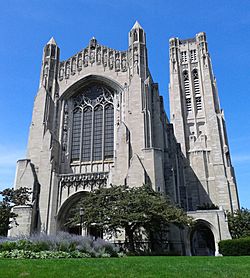 Front view of the Rockefeller Chapel. 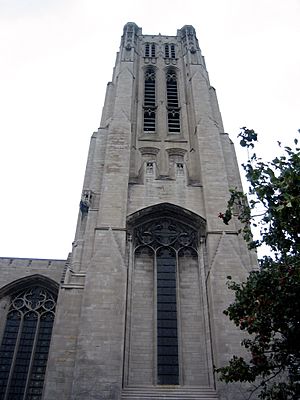 The carillon tower of the Rockefeller Chapel.

Rockefeller Chapel is a Gothic Revival chapel on the campus of the University of Chicago in Chicago, Illinois. A monumental example of Collegiate Gothic architecture, it was meant by patron John D. Rockefeller to be the "central and dominant feature" of the campus; at 200.7 feet it is by covenant the tallest building on campus and seats 1700.

Designed by architect Bertram Goodhue between 1918 and 1924, and built between 1925 and 1928 without the use of structural steel, it contains about 70 integrated figural sculptures by sculptors Lee Lawrie and Ulric Ellerhusen, and interior work by mosaicist Hildreth Meiere. Today the chapel is used for ecumenical worship services, weddings, university convocations, guest speakers, musical programs, and occasional film screenings. It occupies most of a block and can seat 1700 people.

The woodcarvings that adorn the organ and South balcony were created by Alois Lang, a Master Woodcarver at the American Seating Co., and one of the artists responsible for bringing the medieval art of ecclesiastical carving back to life. His pieces in Rockefeller Chapel are carved from White Appalachian Oak.

All content from Kiddle encyclopedia articles (including the article images and facts) can be freely used under Attribution-ShareAlike license, unless stated otherwise. Cite this article:
Rockefeller Chapel Facts for Kids. Kiddle Encyclopedia.