Kids Encyclopedia Facts
This page is about the mineral. For other uses, see Alabaster (disambiguation). 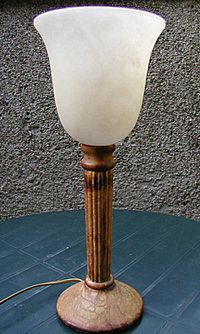 A modern uplighter lamp made from Italian alabaster (white and brown types). The base is 5 inches (13 cm) in diameter 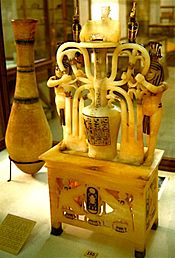 Alabaster is a name applied to varieties of two distinct minerals. Gypsum is a hydrous sulfate of calcium, and calcite is a carbonate of calcium. Gypsum is the alabaster of the present day; calcite is generally the alabaster of the ancients. Both are easy to work. They are attractive to look at. Both have been used for making a variety of artworks and objects, especially small carvings.

The two kinds are easy to tell apart. One is harder than the other. Calcite is hard (Mohs hardness 3). Gypsum is soft (Mohs hardness 1.5 to 2). It can be easily scratched by a fingernail. Also, calcite effervesces when it is treated with hydrochloric acid. Gypsum does not.

All content from Kiddle encyclopedia articles (including the article images and facts) can be freely used under Attribution-ShareAlike license, unless stated otherwise. Cite this article:
Alabaster Facts for Kids. Kiddle Encyclopedia.