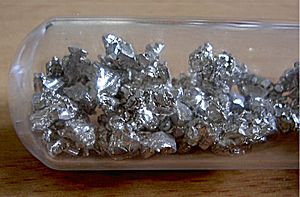 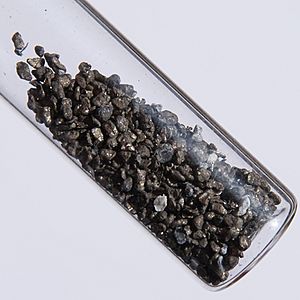 Calcium is a chemical element. Its symbol on the periodic table (a list of all the elements) is Ca. Its atomic number is 20. (The atomic number says where Calcium sits in the periodic table.) It has 20 protons and 20 electrons (if is an atom, see ion). The most common isotopes are Ca-40 and Ca-44. Its mass number is about 40.08. Calcium is very important in the human body, for making bones and for other purposes.

Calcium is a soft white-gray metal. It is a solid and is opaque. It is an alkaline earth metal. Its melting point is hotter than most other reactive metals. It is a little harder than lead. It has two allotropes. It does not conduct electricity as well as copper, but is much lighter in weight.

One of the 'Ain Ghazal Statues, made from lime plaster

Calcium compounds were known for millennia, although their chemical makeup was not understood until the 17th century. Lime as a building material and as plaster for statues was used as far back as around 7000 BC. The first dated lime kiln dates back to 2500 BC and was found in Khafajah, Mesopotamia. At about the same time, dehydrated gypsum (CaSO4·2H2O) was being used in the Great Pyramid of Giza; this material would later be used for the plaster in the tomb of Tutankhamun. The climate of present-day Italy being warmer than that of Egypt, the ancient Romans instead used lime mortars made by heating limestone (CaCO3); the name "calcium" itself derives from the Latin word calx "lime". Vitruvius noted that the lime that resulted was lighter than the original limestone, attributing this to the boiling of the water; in 1755, Joseph Black proved that this was due to the loss of carbon dioxide, which as a gas had not been recognised by the ancient Romans.

In 1787, Antoine Lavoisier suspected that lime might be an oxide of a fundamental chemical element. In his table of the elements, Lavoisier listed five "salifiable earths" (i.e., ores that could be made to react with acids to produce salts (salis = salt, in Latin): chaux (calcium oxide), magnésie (magnesia, magnesium oxide), baryte (barium sulfate), alumine (alumina, aluminium oxide), and silice (silica, silicon dioxide). About these "elements", Lavoisier speculated:

We are probably only acquainted as yet with a part of the metallic substances existing in nature, as all those which have a stronger affinity to oxygen than carbon possesses, are incapable, hitherto, of being reduced to a metallic state, and consequently, being only presented to our observation under the form of oxyds, are confounded with earths. It is extremely probable that barytes, which we have just now arranged with earths, is in this situation; for in many experiments it exhibits properties nearly approaching to those of metallic bodies. It is even possible that all the substances we call earths may be only metallic oxyds, irreducible by any hitherto known process.

Calcium, along with its congeners magnesium, strontium, and barium, was first isolated by Humphry Davy in 1808. Following the work of Jöns Jakob Berzelius and Magnus Martin af Pontin on electrolysis, Davy isolated calcium and magnesium by putting a mixture of the respective metal oxides with mercury(II) oxide on a platinum plate which was used as the anode, the cathode being a platinum wire partially submerged into mercury. Electrolysis then gave calcium–mercury and magnesium–mercury amalgams, and distilling off the mercury gave the metal. However, pure calcium cannot be prepared in bulk by this method and a workable commercial process for its production was not found until over a century later. 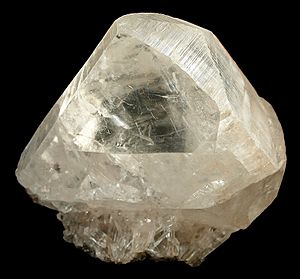 Calcium is not found as a metal in the ground; it is too reactive. Calcium carbonate, also known as calcite, is the most common calcium mineral.

It is important to know how cells work. Many cells have calcium channels on their surface. These are openings where calcium ions can enter the cell. The cell is told to act and it opens the channels. Once in the cell calcium ions activates many proteins to do specific things. For example, when it goes into muscle cells, it makes them contract (shorten so the muscle pulls.) When it goes into nerve cells, it triggers electrical impulses that send a messages. When it goes into white blood cells it makes them fight germs.

Calcium ions are important to cells, but too many calcium ions can be bad. If a cell gets more calcium ion than it needs it can die. This is why the amount of calcium ion in cells is highly regulated. Conversely, not enough calcium ion is bad. Cells must have the right amount to function properly.

Sometimes cells are unhealthy and need to die in for the body to replace them with new, healthy cells. This keeps the whole organism healthy. Cells know when they should die and can trigger reactions to end their life cycles in many ways. When this happens it is called apoptosis, also known as a 'programmed cell death' (planned cell death.) One way cells accomplish apoptosis by taking in toxic levels of calcium ions.

Calcium is very important for the human body.

Bones contain most of the calcium ion in the human body. If we need more calcium for our blood, muscles, or other tissue, it comes from the bones. If we have extra calcium it goes into bones.

Calcium as an element is not found in the human body, just calcium ions in the form of chemical compounds.

The body controls this by changing

The control of calcium in the body is called calcium metabolism. Too little calcium can cause osteoporosis.

The body controls calcium levels with many hormones. Calcitonin, Parathyroid hormone (acronym PTH), and Vitamin D are the most important hormones in calcium metabolism. (Vitamin D works as a hormone but it is called a vitamin.) 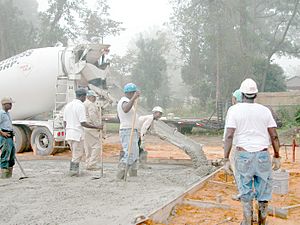 Concrete used to make a building

Calcium compounds are also important in chemistry. It is important for making things. It is a part of cement which is needed to make concrete (a hard substance that many buildings are made from.)

Calcium is part of calcium oxide. Calcium oxide is used to make paper, pottery, food, and to purify water (make it good to drink.) Calcium carbonate is used as a calcium supplement. Calcium permanganate can be used as a rocket propellant.

Calcium is toxic as an element. It reacts with water and makes a strong base, calcium hydroxide. Calcium compounds are not toxic unless the anion is toxic. Calcium permanganate is only toxic because of the permanganate, not the calcium. Like other alkaline earth metals calcium burns easily and brightly.

All content from Kiddle encyclopedia articles (including the article images and facts) can be freely used under Attribution-ShareAlike license, unless stated otherwise. Cite this article:
Calcium Facts for Kids. Kiddle Encyclopedia.