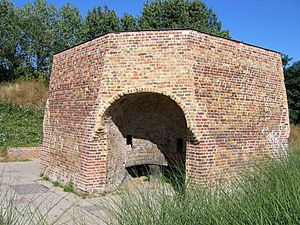 A lime kiln is a kiln used to produce quicklime by the calcination of limestone (calcium carbonate). The chemical equation for this reaction is:

Limestone is poured into one side of the kiln, it is then heated up with hot air and quicklime [Calcium Oxide] comes out the other end. Waste Gases come out of the top of the kiln.

Permanent lime kilns fall into two broad categories: "flare kilns" also known as "intermittent" or "periodic" kilns; and "draw kilns" also known as "perpetual" or "running" kilns. In a flare kiln, a bottom layer of coal was built up and the kiln above filled solely with chalk. The fire was alight for several days, and then the entire kiln was emptied of the lime.

In a draw kiln, usually a stone structure, the chalk or limestone was layered with wood, coal or coke and lit. As it burnt through, lime was extracted from the bottom of the kiln, through the draw hole. Further layers of stone and fuel were added to the top.

The common feature of early kilns was an egg-cup shaped burning chamber, with an air inlet at the base (the "eye"), constructed of brick. Limestone was crushed (often by hand) to fairly uniform 20–60 mm (1–2 1⁄2 in) lumps – fine stone was rejected. Successive dome-shaped layers of limestone and wood or coal were built up in the kiln on grate bars across the eye. When loading was complete, the kiln was kindled at the bottom, and the fire gradually spread upwards through the charge. When burnt through, the lime was cooled and raked out through the base. Fine ash dropped out and was rejected with the "riddlings".

Only lump stone could be used, because the charge needed to "breathe" during firing. This also limited the size of kilns and explains why kilns were all much the same size. Above a certain diameter, the half-burned charge would be likely to collapse under its own weight, extinguishing the fire. So kilns always made 25–30 tonnes of lime in a batch. Typically the kiln took a day to load, three days to fire, two days to cool and a day to unload, so a one-week turnaround was normal. The degree of burning was controlled by trial and error from batch to batch by varying the amount of fuel used. Because there were large temperature differences between the center of the charge and the material close to the wall, a mixture of underburned (i.e. high loss on ignition), well-burned and dead-burned lime was normally produced. Typical fuel efficiency was low, with 0.5 tonnes or more of coal being used per tonne of finished lime (15 MJ/kg).

Lime production was sometimes carried out on an industrial scale. One example at Annery in North Devon, England, near Great Torrington, was made up of three kilns grouped together in an 'L' shape and was situated beside the Torrington canal and the River Torridge to bring in the limestone and coal, and to transport away the calcined lime in the days before properly metalled roads existed.

Sets of seven kilns were common. A loading gang and an unloading gang would work the kilns in rotation through the week.

A rarely used kiln was known as a "lazy kiln".

The large kiln at Crindledykes near Haydon Bridge, Northumbria, was one of more than 300 in the county. It was unique to the area in having four draw arches to a single pot. As production was cut back, the two side arches were blocked up, but were restored in 1989 by English Heritage.

The development of the national rail network made the local small-scale kilns increasingly unprofitable, and they gradually died out through the 19th century. They were replaced by larger industrial plants. At the same time, new uses for lime in the chemical, steel and sugar industries led to large-scale plants. These also saw the development of more efficient kilns.

A lime kiln erected at Dudley, West Midlands (formerly Worcestershire) in 1842 survives to this day as part of the Black Country Living Museum which opened in 1976; although, the kilns were last used during the 1920s. It is now among the last still existing in a region which was dominated by coalmining and limestone mining for generations until the 1960s.

In the late 19th and early 20th centuries the town of Waratah in Gippsland, Victoria, Australia produced a majority of the quicklime used in the city of Melbourne as well as around other parts of Gippsland. The town, now called Walkerville, was set on an isolated part of the Victorian coastline and exported the lime by ship. When this became unprofitable in 1926 the kilns were shut down. The present-day area, though having no town amenities as such, markets itself as a tourist destination. The ruins of the lime kilns can still be seen today. 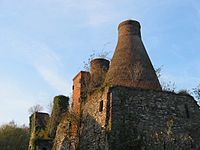 All content from Kiddle encyclopedia articles (including the article images and facts) can be freely used under Attribution-ShareAlike license, unless stated otherwise. Cite this article:
Lime kiln Facts for Kids. Kiddle Encyclopedia.