Baden-Württemberg is a federal state (Bundesland) in the southwestern region of Germany. It is the third largest German state by total area (after Bavaria and Lower Saxony) with a size of nearly 35,752 km² and population (after North Rhine-Westphalia and Bavaria) with over 11 million people as of 2017. It shares borders to the east with the state of Bavaria, to the north with the states of Hesse and Rhineland-Palatinate, to the west with the country of France (along the river Rhine), and to the south with the countries of Switzerland and Austria. Its biggest cities are Stuttgart, the capital, Mannheim, and Karlsruhe. The Minister President is Winfried Kretschmann of the party Alliance '90/The Greens.

In 2017, Baden-Württemberg ranked 2 on the Human Development Index (HDI) among all states in Germany.

In 1952, the three states of Baden, Württemberg-Baden and Württemberg-Hohenzollern joined together to found Baden-Württemberg.

The Minister President is the chief of the government of Baden-Württemberg. The government is made up of ministers and state secretaries.

Since 2016 there have been 5 parties represented in the Landtag of Baden-Württemberg: 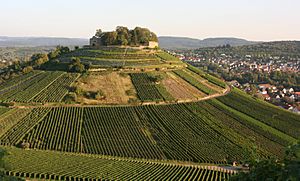 The castle ruin in Weinsberg

The Black forest, the Swabian Alb and the Lake Constance are world famous holiday regions. The highest mountain is the Feldberg (1492m).

Other important cities for tourism in Baden-Württemberg besides the capital city of Stuttgart are: Freiburg, Heidelberg, Rastatt, Karlsruhe, Mannheim, Ulm, Ravensburg and Heilbronn.

The Danube, the Neckar and the Rhine are important rivers which are in the state.

Baden-Württemberg has the third largest economy in Germany after the economies of North Rhine-Westphalia and Bavaria. It had a gross regional product (GRP) of €524.33 billion in 2019.

All content from Kiddle encyclopedia articles (including the article images and facts) can be freely used under Attribution-ShareAlike license, unless stated otherwise. Cite this article:
Baden-Württemberg Facts for Kids. Kiddle Encyclopedia.