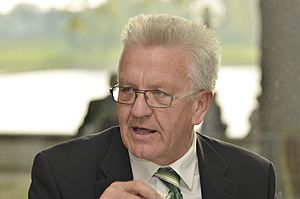 Kretschmann is born to Catholic parents. He went to school in Riedlingen (District of Biberach). His parents wanted him to become a priest. Instead he joined a school for teaching education and became teacher for Biology, Chemistry and Ethics.

Kretschmann started his political career at the Communist League of West Germany in 1973. He later changed his view and is now part of the more conservative Green party.

In the parliamentarian of the Baden-Wuerttemberg state parliament election 2016 he was reelected.

Kretschmann is married and has three children.

All content from Kiddle encyclopedia articles (including the article images and facts) can be freely used under Attribution-ShareAlike license, unless stated otherwise. Cite this article:
Winfried Kretschmann Facts for Kids. Kiddle Encyclopedia.