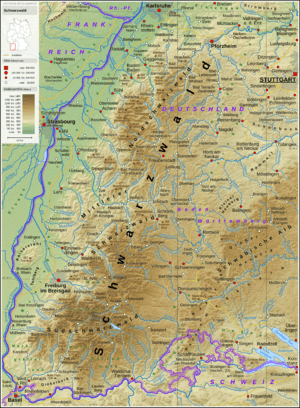 Map of the Black Forest

The Black Forest (German: Schwarzwald) is a world famous forest in Baden-Württemberg, Germany.

The Black Forest is quite popular for hiking, skiing and Nordic walking. In Triberg, at the lake Titisee and in other places you can buy the famous cuckoo clocks. A good way to get known to the Black Forest is to travel on the Deutsche Uhrenstraße, a "National Scenic Byway."

All content from Kiddle encyclopedia articles (including the article images and facts) can be freely used under Attribution-ShareAlike license, unless stated otherwise. Cite this article:
Black Forest Facts for Kids. Kiddle Encyclopedia.