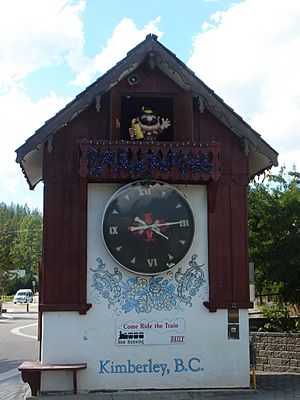 A cuckoo clock is a typically pendulum-regulated clock that strikes the hours with a sound like a common cuckoo's call and has an automated cuckoo bird that moves with each note. Some move their wings and open/close their beaks while leaning forward, whereas in others, only the bird's body leans forward. The mechanism to produce the cuckoo call has been in use since the middle of the 18th century and has remained almost without variation until the present.

It is unknown who invented it and where the first one was made. It is thought that much of its development and evolution was made in the Black Forest area in southwestern Germany (State of Baden-Württemberg), the region where the cuckoo clock was popularized. The cuckoo clocks were exported to the rest of the world from the mid 1850s on. Today, the cuckoo clock is one of the favourite souvenirs of travelers in Germany, Switzerland, and Austria. It has become a cultural icon of Germany.

One of two gedackt Cuckoo pipes

The design of a cuckoo clock is now conventional. Most are made in the "traditional style" (also known as "carved") or "chalet" to hang on a wall. In the "traditional style" the wooden case is decorated with carved leaves and animals. They have an automaton of the bird that appears through a small trap door while the clock is striking. The bird is often made to move as the clock strikes, typically by means of an arm that lifts the back of the carving. 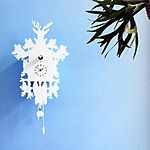 Designer cuckoo clock by Pascal Tarabay, 2005. It is based on the traditional Jagdstück (Hunt piece)

In 1629, many decades before clock-making was established in the Black Forest, an Augsburg nobleman by the name of Philipp Hainhofer (1578–1647) penned the first known description of a modern cuckoo clock.

The early 21st century has seen a revitalization of this ancient icon with designs, materials, technologies, shapes and colors never seen before in cuckoo clock manufacturing.

In Europe, museums that display collections are the Cuckooland Museum in the UK, and the Deutsches Uhrenmuseum and Dorf- und Uhrenmuseum Gütenbach in Germany. One of the biggest private collections in the United States that are open to the public located in Minneapolis. It contains more than 300 cuckoo clocks.

All content from Kiddle encyclopedia articles (including the article images and facts) can be freely used under Attribution-ShareAlike license, unless stated otherwise. Cite this article:
Cuckoo clock Facts for Kids. Kiddle Encyclopedia.