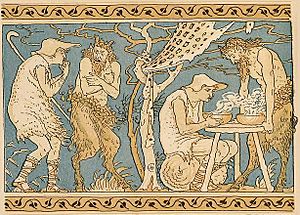 Walter Crane's illustration of the fable of "The Satyr and the Peasant" from Baby's Own Aesop (London, 1887)

A satyr is a creature from Greek mythology. They are usually depicted with the upper half of a human and the legs of a goat, and horns on their heads. Satyrs were usually companions of Dionysus and Pan. They are often shown in art chasing after nymphs and were associated with nature and fertility.

All content from Kiddle encyclopedia articles (including the article images and facts) can be freely used under Attribution-ShareAlike license, unless stated otherwise. Cite this article:
Satyr Facts for Kids. Kiddle Encyclopedia.