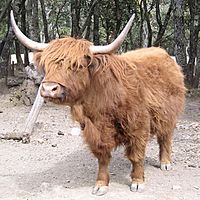 Horns are part of the body of some animals. They grow on the animal's head. They are projections (things that stick out) made of hard skin. The horn has a lot of keratin in it, the same protein that is in human hair and nails.

Normally horned animals will have two horns, but the rhinoceros has just one horn in the middle of its head.

Animals often use their horns for fighting one another.

The term "horn" is also popularly applied to other hard and pointed features attached to the head of animals in various other families: 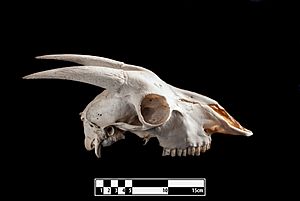 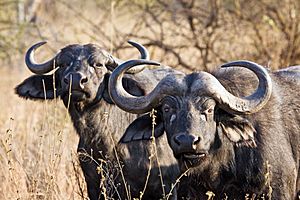 African buffalo (both sexes have horns)

Animals have a variety of uses for horns and antlers, including defending themselves from predators and fighting members of their own species (horn fighting) for territory, dominance or mating priority. Horns are usually present only in males but in some species, females too may possess horns. It has been theorized by researchers that taller species living in the open are more visible from longer distances and more likely to benefit from horns to defend themselves against predators. Female bovids that are not hidden from predators due to their large size or open savannah like habitat are more likely to bear horns than small or camouflaged species.

In addition, horns may be used to root in the soil or strip bark from trees. In animal courtship many use horns in displays. For example, the male blue wildebeest reams the bark and branches of trees to impress the female and lure her into his territory. Some animals with true horns use them for cooling. The blood vessels in the bony core allow the horns to function as a radiator.

After the death of a horned animal, the keratin may be consumed by the larvae of the Horn Moth.

All content from Kiddle encyclopedia articles (including the article images and facts) can be freely used under Attribution-ShareAlike license, unless stated otherwise. Cite this article:
Horn (anatomy) Facts for Kids. Kiddle Encyclopedia.