The narwhal (Monodon monoceros), or narwhale, is a medium-sized toothed whale that possesses a large "tusk" from a protruding canine tooth. It lives year-round in the Arctic waters around Greenland, Canada, and Russia. It is one of two living species of whale in the Monodontidae family, along with the beluga whale. The narwhal males are distinguished by a long, straight, helical tusk, which is an elongated upper left canine. The narwhal was one of many species described by Carl Linnaeus in his publication Systema Naturae in 1758.

Like the beluga, narwhals are medium-sized whales. For both sexes, excluding the male's tusk, the total body size can range from 3.95 to 5.5 m (13 to 18 ft); the males are slightly larger than the females. The average weight of an adult narwhal is 800 to 1,600 kg (1,760 to 3,530 lb). At around 11 to 13 years old, the males become sexually mature; females become sexually mature at about 5 to 8 years old. Narwhals do not have a dorsal fin, and their neck vertebrae are jointed like those of most other mammals, not fused as in dolphins and most whales.

Found primarily in Canadian Arctic and Greenlandic and Russian waters, the narwhal is a uniquely specialized Arctic predator. In winter, it feeds on benthic prey, mostly flatfish, under dense pack ice. During the summer, narwhals eat mostly Arctic cod and Greenland halibut, with other fish such as polar cod making up the remainder of their diet. Each year, they migrate from bays into the ocean as summer comes. In the winter, the male narwhals occasionally dive up to 1,500 m (4,920 ft) in depth, with dives lasting up to 25 minutes. Narwhals, like most toothed whales, communicate with "clicks", "whistles", and "knocks".

Narwhals can live up to 50 years. They are often killed by suffocation when the sea ice freezes over. Other causes of death, specifically among young whales, are starvation and predation by orcas. As previous estimates of the world narwhal population were below 50,000, narwhals are categorized by the International Union for Conservation of Nature (IUCN) as Nearly Threatened. More recent estimates list higher populations (upwards of 170,000), thus lowering the status to Least Concern. Narwhals have been harvested for hundreds of years by Inuit people in northern Canada and Greenland for meat and ivory, and a regulated subsistence hunt continues.

This narwhal skull has rare double tusks. Usually, the canine tooth only on the left side of the upper jaw becomes a tusk. Rarely, males develop two tusks. This specimen, however, was of a female (Zoologisches Museum, Hamburg; collected in 1684)

All narwhals have two teeth in their upper jaw. After the first year of a male narwhal's life, its left tooth grows outward, spirally.

There are some narwhals that are double-tusked, but they are not as common. This long, single or double tooth projects from its upper jaw and can grow to be 8.75 feet (2.7 meters) long. Tusks are usually twisted in a counterclockwise direction and are hollow inside.

The tusk's function is uncertain, perhaps used as a formidable jousting weapon in courtship and dominance rivalry, in getting food, and/or for channeling and amplifying sonar pulses (which they emit). The tusk is not used in hunting.

Narwhal can dive deep into the sea to around 800 meters, but can also sometimes dive up to 1,500 meters. This makes them one of the deepest diving sea mammals. 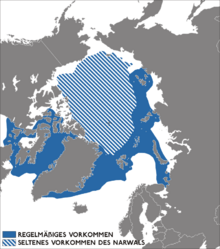 Narwhals live mostly in the solid blue areas of this map, but also live in the striped blue areas.

Narwhals live in the icy waters of the Arctic seas. They do not go far away from ice. Narwhals are migrating animals who like to move from one place to live in another place for a while.

When it is warm in summer, groups of them move closer to land, where they can sometimes be seen in the estuaries, deep fjords, and bays of Greenland and Northern Canada.

These groups can be as big as 10 or even as big as 100 sometimes. But when Winter comes around again, they move back to the Icy waters, where they breathe from small holes in the ice. Every so often lucky people get to see them in North-West Russia.

Narwhals can hunt under ice and like to eat Arctic fish such as the flatfish Greenland halibut, the polar and Arctic cod, shrimp and squid. They suck in their prey when they get close.

Narwhals are both hunted by polar bears and killer whales. Sometimes however, even humans hunt Narwhals. The native Inuit people who are sometimes called the Eskimos, are allowed to hunt the Narwhals for food.

The Narwhals blubber keeps it warm in the Antartic Sea's cold water all year long, and during the summer it swims in groups of '10-100' to Northern Canada and Iceland. 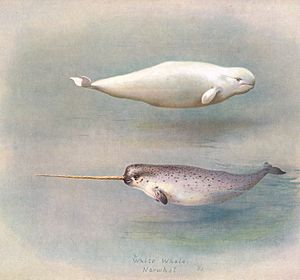 Illustration of a narwhal and a beluga, its closest living relative

Narwhals normally congregate in groups of about five to ten, and sometimes up to 20 outside the summer. Groups may be "nurseries" with only females and young, or can contain only post-dispersal juveniles or adult males ("bulls"), but mixed groups can occur at any time of year. In the summer, several groups come together, forming larger aggregations which can contain from 500 to over 1000 individuals.

At times, a bull narwhal may rub its tusk with another bull, a display known as "tusking" and thought to maintain social dominance hierarchies. However, this behaviour may exhibit tusk use as a sensory and communication organ for sharing information about water chemistry sensed in tusk microchannels.

Narwhals have a relatively restricted and specialized diet. Their prey is predominantly composed of Greenland halibut, polar and Arctic cod, cuttlefish, shrimp and armhook squid. Additional items found in stomachs have included wolffish, capelin, skate eggs and sometimes rocks, accidentally ingested when whales feed near the bottom. Due to the lack of well-developed dentition in the mouth, narwhals are believed to feed by swimming towards prey until it is within close range and then sucking it with considerable force into the mouth. It is thought that the beaked whales, which have similarly reduced dentition, also suck up their prey. 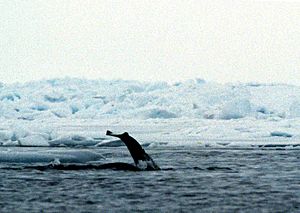 Photo of the tail fluke of a narwhal

When in their wintering waters, narwhals make some of the deepest dives recorded for a marine mammal, diving to at least 800 metres (2,620 feet) over 15 times per day, with many dives reaching 1,500 metres (4,920 feet). Dives to these depths last around 25 minutes, including the time spent at the bottom and the transit down and back from the surface.

As with most toothed whales, narwhals use sound to navigate and hunt for food. "Clicks", "whistles" and "knocks" may be created via air between chambers near the blow-hole, and reflected off the sloping front of the skull. These sounds are then focused by the animal's melon, which can be controlled by musculature. "Click trains" are produced both for echolocation of prey, and for locating obstacles at short distances.

Females start bearing calves when six to eight years old. Adult narwhals mate in April or May when they are in the offshore pack ice. Gestation lasts for 14 months and calves are born between June and August the following year. As with most marine mammals, only a single young is born, averaging 1.6 metres (5.2 feet) in length and white or light grey in color.

Newborn calves begin their lives with a thin layer of blubber which thickens as they nurse their mother's milk which is rich in fat. Calves are dependent on milk for around 20 months. This long lactation period gives calves time to learn skills needed for survival during maturation when they stay within two body lengths of the mother.

Narwhals can live up to at least 50 years. Mortality often occurs when the narwhals suffocate after they fail to leave before the surface of the Arctic waters freeze over in the late autumn. As narwhals need to breathe, they drown if open water is no longer accessible and the ice is too thick for them to break through.

Major predators are polar bears, which attack at breathing holes mainly for young narwhals, Greenland sharks, and walruses. Killer whales (orcas) group together to overwhelm narwhal pods in the shallow water of enclosed bays, in one case killing dozens of narwhals in a single attack. To escape predators such as orcas, narwhals may use prolonged submergence to hide under ice floes rather than relying on speed. 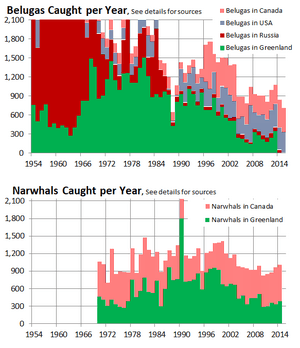 All content from Kiddle encyclopedia articles (including the article images and facts) can be freely used under Attribution-ShareAlike license, unless stated otherwise. Cite this article:
Narwhal Facts for Kids. Kiddle Encyclopedia.