While the bay does not have any permanent settlements, it remains an important Inuit habitation site.

Stanwell-Fletcher Lake is joined to the bay by the Union River; crystalline rocks are notable along the way. The Creswell River also empties into the bay.

The Devonian Peel Sound Formation outcrops at the bay. The formation consists of sandstone, grit, and conglomerate which is predominantly limestone. 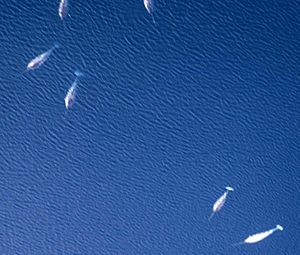 Narwhals in the bay

All content from Kiddle encyclopedia articles (including the article images and facts) can be freely used under Attribution-ShareAlike license, unless stated otherwise. Cite this article:
Creswell Bay Facts for Kids. Kiddle Encyclopedia.