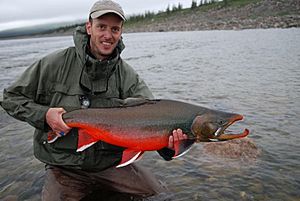 Arctic char or Arctic charr, Salvelinus alpinus, is a cold water fish in the family Salmonidae. It is native to Arctic, sub-Arctic and alpine lakes. It breeds in fresh water. Char may either be landlocked or anadromous, migrating to the sea.

No other freshwater fish is found as far north. It the only fish species in Lake Hazen on Ellesmere Island in the Canadian Arctic. It is one of the rarest fish species in Britain.found only in deep, cold, glacial lakes, and is at risk from acidification. In other parts of its range, such as Scandinavia, it is much more common, and is fished extensively. It is also common in the Alps, (particularly in Trentino and in the mountain part of Lombardy). Char are also found in Iceland. In Siberia, it is known as golets.

The Arctic char is a relative of both salmon and lake trout. It shares traits with both.

The char's color depends on the time of year and where it lives. The back is usually dark brown or olive green. On its sides it has dark spots on a light background. The color can be gold, brown, red, or orange. At spawning the fins and belly become bright red or orange.

All content from Kiddle encyclopedia articles (including the article images and facts) can be freely used under Attribution-ShareAlike license, unless stated otherwise. Cite this article:
Arctic char Facts for Kids. Kiddle Encyclopedia.