Kids Encyclopedia Facts
Not to be confused with Somerset Island, Bermuda. 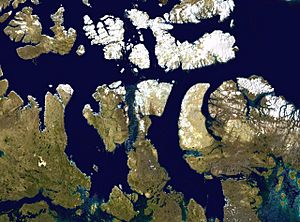 Satellite photo montage of Somerset Island and its neighbours

In the Canadian Arctic Archipelago, Somerset Island (Inuktitut Kuuganajuk) is a large, uninhabited island separated by the 2 km (1.2 mi) wide Bellot Strait from the Boothia Peninsula in the Qikiqtaaluk Region of Nunavut, Canada, lying between Peel Sound (across which lies Prince of Wales Island) and Prince Regent Inlet (across which lies Baffin Island). It has an area of 24,786 km2 (9,570 sq mi), making it the 46th largest island in the world and Canada's twelfth largest island.

Around 1000 AD, the north coast of Somerset Island was inhabited by the Thule people, as evidenced by whale bones, tunnels and stone ruins.

William Edward Parry was the first European to sight the island in 1819.

HMS Fury was an arctic exploration ship commanded by Henry Parkyns Hoppner. She was damaged by ice while overwintering and was abandoned on 25 August 1825, at what has since been called Fury Beach on Somerset Island. Her stores were unloaded onto the beach and later came to the rescue of John Ross, who traveled overland to the abandoned cache when he lost his ship further south in the Gulf of Boothia on his 1829 expedition.

James Clark Ross was the nephew of John Ross, and accompanied him on the 1829 expedition. In late 1848, James Clark Ross returned to Somerset Island by landing two ships at Port Leopold on the northeast coast to winter. In April the following year, he launched an exploration of the island by sledge.

Roald Amundsen transited the passage between the Island and the Prince of Wales Island in the Gjøa in the first successful traverse of the Northwest Passage in 1904. Henry Larsen transited the passage, in the St Roch in the second successful transit in 1943. But he found this route was dangerously icebound, and also too shallow for commercial travel.

The Fort Ross trading post was established and run by the Hudson's Bay Company at the southeastern end of the island from 1937 to 1948. When it was closed, the island was left uninhabited except for occasional use of the former store and manager's house as shelters by Inuit caribou hunters from Taloyoak and a small settlement at Creswell Bay, which after 1967 consisted solely of the family of Timothy Idlout and Naomi Nangat. The Idlout family left Somerset Island in 1991, leaving it completely uninhabited. In 2006, CBC's The National included Fort Ross in a special series focused on climate change.

All content from Kiddle encyclopedia articles (including the article images and facts) can be freely used under Attribution-ShareAlike license, unless stated otherwise. Cite this article:
Somerset Island (Nunavut) Facts for Kids. Kiddle Encyclopedia.