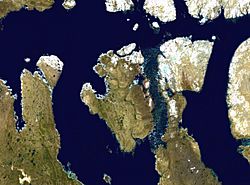 Satellite image of Prince of Wales Island and its neighbours

Prince of Wales Island one of the bigger members of the Canadian Arctic Archipelago. It is an Arctic island in Nunavut, Canada, between Victoria Island and Somerset Island and south of the Queen Elizabeth Islands.

It is a low tundra-covered island with an irregular coastline deeply indented by Ommanney Bay in the west and Browne Bay in the east. Its area has been thought to be around 33 339 km². Prince of Wales Island is the world's 40th biggest island and the 10th biggest in Canada. Its highest known point, found at 73°49'N; 97°50'W – and 320 m high – is an unnamed spot in the island's far northeastern end [1] overlooking the Baring Channel, which separates the island from nearby Russell Island.

All content from Kiddle encyclopedia articles (including the article images and facts) can be freely used under Attribution-ShareAlike license, unless stated otherwise. Cite this article:
Prince of Wales Island (Nunavut) Facts for Kids. Kiddle Encyclopedia.