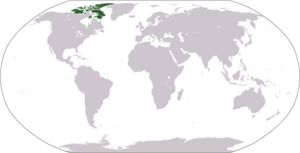 Location of the Canadian Arctic Archipelago

The archipelago has 94 major islands (bigger than 130 km²), including three of the world's ten biggest islands, and 36,469 minor islands. The bigger islands of the archipelago (over 10,000 km²) are:

All content from Kiddle encyclopedia articles (including the article images and facts) can be freely used under Attribution-ShareAlike license, unless stated otherwise. Cite this article:
Canadian Arctic Archipelago Facts for Kids. Kiddle Encyclopedia.