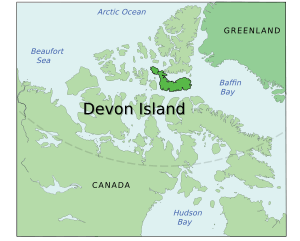 Satellite image of Devon Island and its neighbours

Devon Island is also notable for having the Haughton impact crater, made some 39 million years ago when a meteorite about 2 km (1.2 mi) in diameter crashed into what were then forests. The impact left a crater about 23 km (14 mi) in diameter, which was a lake for several million years.

All content from Kiddle encyclopedia articles (including the article images and facts) can be freely used under Attribution-ShareAlike license, unless stated otherwise. Cite this article:
Devon Island Facts for Kids. Kiddle Encyclopedia.