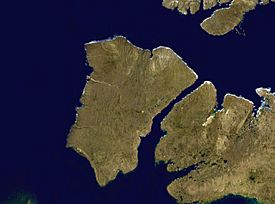 Banks Island (73°0′N 121°30′W) is one of the bigger members of the Canadian Arctic Archipelago. It is in the Inuvik Region of the Northwest Territories, Canada. It is separated from Victoria Island to its east by the Prince of Wales Strait and from the mainland by Amundsen Gulf to its south. The Beaufort Sea lies to its west. To the northeast, McClure Strait separates the island from Prince Patrick Island and Melville Island.

It was named "Banks Island" in 1820 by Sir William Parry in honour of Sir Joseph Banks. However, during the exploration of the area by Robert McClure (1850-1854) the island was marked on their maps as "Baring Island".

The only permanent Inuvialuit settlement on the island, Sachs Harbour or Ikhuak, is on the southwest coast. Two federal Migratory Bird Sanctuaries were founded on the island in 1961. The island does not have any trees, with the tallest plant, the arctic willow, sometimes growing to about the height of a person's knee but usually standing no taller than 10 cm.

All content from Kiddle encyclopedia articles (including the article images and facts) can be freely used under Attribution-ShareAlike license, unless stated otherwise. Cite this article:
Banks Island Facts for Kids. Kiddle Encyclopedia.