Banks took part in Captain James Cook's first great voyage from 1768 to 1771. He inherited a large fortune, and was able to hire his own team to help collect, package and transport his finds. Banks discovered and collected Eucalyptus, Acacia, Mimosa, and Banksia. About 80 species of plants are named after Banks. 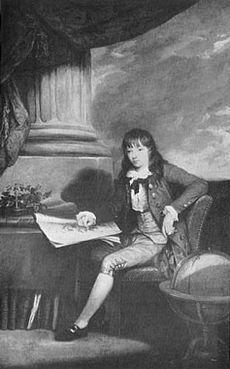 A 1757 portrait of Banks with a botanical illustration, unknown artist, but attributed to Lemuel Francis Abbott or Johann Zoffany

Banks was born in Argyll Street, Soho, the son of William Banks, a rich Lincolnshire country squire and member of the House of Commons, and his wife Sarah, daughter of William Bate. He was baptised at St James's Church, Piccadilly, on 20 February 1743, Old Style. He had a younger sister, Sarah Sophia Banks, born in 1744.

Banks was promptly appointed to a joint Royal Navy/Royal Society scientific expedition to the south Pacific Ocean on HMS Endeavour, 1768–1771. This was the first of James Cook's voyages of discovery in that region. Banks joined the ship with a staff of eight: Daniel Solander and H.D. Spöring, naturalists; Alexander Buchan and Sydney Parkinson, artists; James Roberts and Peter Briscoe, tenants from Revesby; Thomas Richmond and George Dorlton (Dollin), negro servants. Only four of this party survived the voyage, Banks himself, Solander and the two Revesby men.

This voyage went first to Brazil, where Banks made the first scientific description of a now common garden plant, Bougainvillea (named after Cook's French counterpart, Louis Antoine de Bougainville), and to other parts of South America. 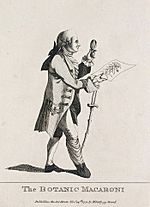 Satire on Banks titled "The Botanic Macaroni". A 'macaroni' was an insult used to describe fashionable men in the 18th Century

The voyage then went to Tahiti (where the transit of Venus was observed, the purpose of the mission), to New Zealand and to the east coast of Australia, where Cook mapped the coastline and made landfall at Botany Bay and at Endeavour River (near modern Cooktown) in Queensland, where they spent seven weeks ashore while the ship was repaired after damage on the Great Barrier Reef.

While they were in Australia Banks, Solander and Spöring made the first collection of Australian plants, describing many that were new to science. Almost 800 specimens were illustrated by the artist Sydney Parkinson and appear in Banks' Florilegium, finally published in 35 volumes between 1980 and 1990. Banks arrived back in England on 12 July 1771 and immediately became famous.

There are many things in Australia named after Banks. These include the Division of Banks, a Federal Electoral Division for the Australian House of Representatives in the state of New South Wales. The species Banksia is named after him.

All content from Kiddle encyclopedia articles (including the article images and facts) can be freely used under Attribution-ShareAlike license, unless stated otherwise. Cite this article:
Joseph Banks Facts for Kids. Kiddle Encyclopedia.