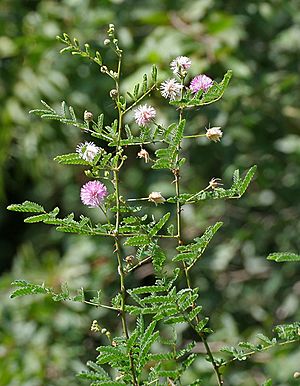 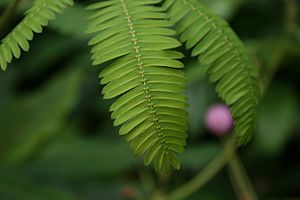 Mimosa before being touched. 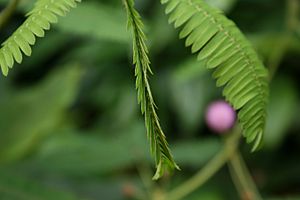 Mimosa with folded-in leaves just after being touched.

Mimosa is a genus of plants. It includes around 400 different species of herbs and shrubs. It is classified in the subfamily Mimosoideae of the legume family Fabaceae. The word "mimosa" comes from the Greek word μιμος that means "mimic".

The best known species of mimosa are Mimosa pudica and Mimosa tenuiflora. Mimosa pudica is found in Central and South America. When touched or heated, it folds its leaves. Mimosa tenuiflora is used by shamans (traditional magical healers.) It is used in ayahuasca brews (a "magic" drink) because of the psychedelic drug DMT in its roots.

The Mimosa genus has gone through many periods of time where it was split up into smaller groupings or lumped into larger ones. It has over 3,000 names to describe it and its species. Most of these names are now considered synonyms. Some of the names have been given to other species and genera.

Because of this, the name "mimosa" has been used for other species that look like mimosa but are not related. Some of the most common unrelated plants with this name are the Silk Tree (Albizia julibrissin) and Sattle (Acacia dealbata.)

This genus includes some plants that are able to move fast. This is very rare. The mimosa's leaves close quickly when touched.

Mimosa is related to the genera Acacia and Albizia. The difference between them is that the mimosa's flowers have ten or fewer stamens. The big round flower of the mimosa is actually an inflorescence, a cluster (close group) of many small flowers.

All content from Kiddle encyclopedia articles (including the article images and facts) can be freely used under Attribution-ShareAlike license, unless stated otherwise. Cite this article:
Mimosa Facts for Kids. Kiddle Encyclopedia.