Acacia, commonly known as the wattles or acacias, is a large genus of shrubs and trees in the subfamily Mimosoideae of the pea family Fabaceae. Initially, it comprised a group of plant species native to Africa and Australia, with the first species described by Linnaeus. Oldest records of fossil Acacia pollen in Australia are from the late Oligocene epoch, 25 million years ago.

A number of species have been introduced to various parts of the world, and two million hectares of commercial plantations have been established. The group varies considerably in habit, from mat-like shrubs to canopy trees in forest. 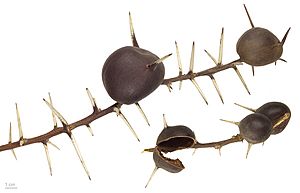 The whistling thorn species of acacia grows, the main defense is provided by pairs of thorns 5cm long arranged nearly at a right angle, some emerging from a pod.

Some species of ants live in each of these pods, which they open up by cutting holes into them. These stinging ants swarm out and prepare to bite anything they can when the branch is disturbed.

Acacias are heavily defended against herbivores. Different species have different combinations of defences: 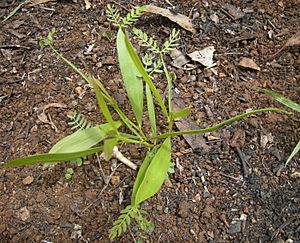 They are present in alpine settings, rainforests, woodlands, grasslands, coastal dunes and deserts. In drier woodlands or forests they are an important component of the underlying layer of vegetation. 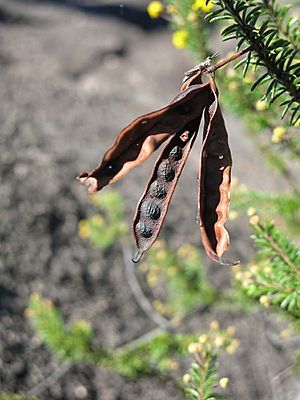 Aboriginal Australians have traditionally harvested the seeds of some species, to be ground into flour and eaten as a paste or baked into a cake. The seeds contain as much as 25% more protein than common cereals, and they store well for long periods due to the hard seed coats. In addition to utilizing the edible seed and gum, the people used the timber for tools, weapons, fuel and musical instruments.

A number of species are economically important and are widely planted globally for wood products, tannin, firewood and fodder.

Acacia is repeatedly mentioned in the Book of Exodus, perhaps referring to Acacia raddiana, in regards to the construction of the Tabernacle.

Acacia is a common food source and host plant for butterflies of the genus Jalmenus, the Jalmenus evagoras, feeds on at least 25 acacia species. 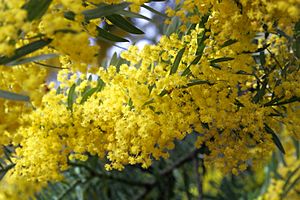 The hardened sap of various species of the acacia tree are known as acacia gum. Acacia gum is used as an emulsifier in food, a binder for watercolour painting, an additive to ceramic glazes, a binding in photography, a protective layer in the lithographic processes and as a binder to bind together fireworks.

Products from the Acacia have often been used for medicinal purposes. Some species of acacia contain psychoactive alkaloids, and some contain potassium fluoroacetate, a rodent poison.

All content from Kiddle encyclopedia articles (including the article images and facts) can be freely used under Attribution-ShareAlike license, unless stated otherwise. Cite this article:
Acacia Facts for Kids. Kiddle Encyclopedia.