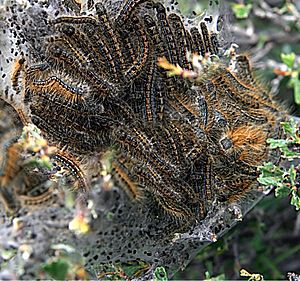 Caterpillars usually have three pairs of small, but noticeable, true legs at the front and up to 5 pairs of fleshy false legs at the back.

Caterpillars are commonly found feeding on leaves, but they are also found inside living stems and branches or on the roots of plants and dead wood.

Most caterpillars are shades of green or brown and are relatively hairless, although in many families caterpillars are very hairy and often brightly coloured. Some species are pests of growing plants, carpets, woollens, organic fabrics and stored food products.

Caterpillars are an important source of food for birds and other invertebrates and many species help dead animals and plants decompose. 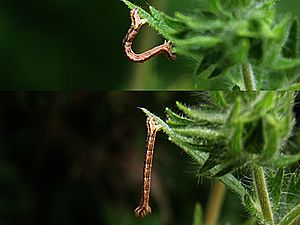 A geometrid caterpillar or inchworm 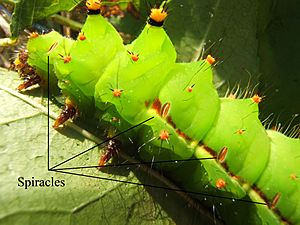 Actias selene with some of the spiracles identified.

Like all insects, caterpillars breathe through a series of small openings along the sides of their thorax and abdomen called spiracles. These branch into the body cavity into a network of tracheae. A few caterpillars of the family Pyralidae are aquatic and have gills that let them breathe underwater.

Caterpillars have 4,000 muscles (compare humans, with 629). They move through contraction of the muscles in the rear segments pushing the blood forward into the front segments elongating the torso. The average caterpillar has 248 muscles in the head segment alone. 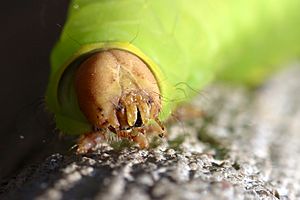 Close-up of a caterpillar face.

Caterpillars do not have good vision. They have a series of six tiny eyelets or 'stemmata' on each side of the lower portion of their head. These can probably form well focused, but poorly resolved images. They move their heads from side to side probably as a means of judging distance of objects, particularly plants. They rely on their short antennae to help them locate food.

Some caterpillars are able to detect vibrations, usually at a specific frequency. Caterpillars of the common hook-tip moth, Drepana arcuata (Drepanoidea) produce sounds to defend their silk nests from members of their own species, by scraping against the leaf in a ritualized acoustic duel. They detect the vibrations conducted by the plant and not air-borne sounds. Similarly, cherry leaf rollers Caloptilia serotinella defend their rolls. Tent caterpillars can also detect vibrations at the frequency of wing beats of one of their natural enemies. 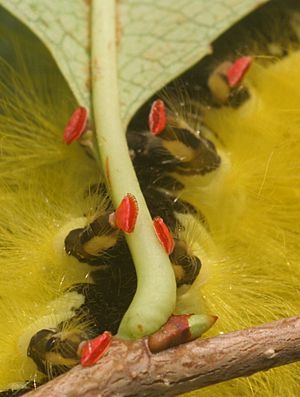 Crochets on a caterpillar's prolegs.

The geometrids, also known as inchworms or loopers, are so named because of the way they move, appearing to measure the earth (the word geometrid means earth-measurer in Greek); the primary reason for this unusual locomotion is the elimination of nearly all the prolegs except the clasper on the terminal segment.

Some larvae of the Hymenoptera (ants, bees and wasps) order can appear like the caterpillars of the lepidoptera. These are mainly seen in the Sawfly family and while the larvae superficially resemble caterpillars, they can be distinguished by the presence of prolegs on every abdominal segment. Another difference is that lepidopteran caterpillars have crochets or hooks on the prolegs while these are absent on the sawfly larvae. Also in lepidopteran caterpillars is the upside down Y shaped suture on the front of the head. The larvae of sawflies differ also in having prominent ocelli on the head capsule.

Many animals feed on caterpillars as they are rich in protein; adversely, caterpillars have evolved various means of defenses. 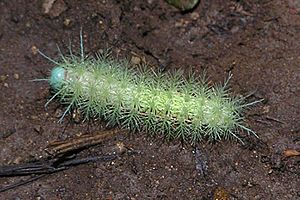 Many caterpillars are cryptically coloured and resemble the plants on which they feed and may even have parts that mimic plant parts such as thorns. Their size varies from as little as 1 mm to about 3 inches. Some look like objects in the environment such as bird droppings. Many feed enclosed inside silk galleries, rolled leaves or by mining between the leaf surfaces. Caterpillars of Nemoria arizonaria that grow in spring feed on oak catkins and appear green. The summer brood however appear like oak twigs. The differential development is linked to the tannin content in the diet.

More aggressive self-defense measures are taken by caterpillars. These caterpillars have spiny bristles or long fine hair-like setae with detachable tips that will irritate by lodging in the skin or mucous membranes. However, some birds, like cuckoos, will swallow even the hairiest of caterpillars. The most aggressive defenses are bristles associated with venom glands, called urticating hairs; a venom among the most potent defensive chemicals in any animals is produced by the South American silk moth genus Lonomia. It is an anticoagulant powerful enough to cause a human to hemorrhage to death (See Lonomiasis). This chemical is being investigated for potential medical applications. Most urticating hairs however range in effect from mild irritation to dermatitis. 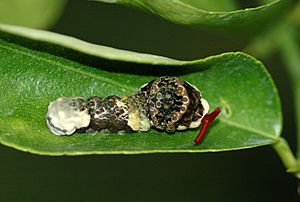 Plants have evolved poisons to protect themselves from herbivores and some caterpillars have evolved countermeasures and eat the leaves of these toxic plants. In addition to being unaffected by the poison, they sequester it in their body, making them highly toxic to predators. These chemicals are also carried on into the adult stages. These toxic species, such as the Cinnabar moth (Tyria jacobaeae) and monarch (Danaus plexippus) caterpillars, usually advertise themselves with brightly striped or coloured in black, red and yellow—the danger colors (see aposematism). Any predator that attempts to eat a caterpillar with an aggressive defence mechanism will learn and avoid future attempts.

Caterpillars can evade predators by using a silk line and dropping off from branches when disturbed.

Some caterpillars obtain protection by associating themselves with ants. The Lycaenid butterflies are particularly well known for this. They communicate with their ant protectors by vibrations as well as chemical means and typically provide food rewards.

Some caterpillars are gregarious; large aggregations are believed to help in reducing the levels of parasitization and predation. Clusters amplify the signal of aposematic coloration, and individuals may participate in group regurgitation or displays. 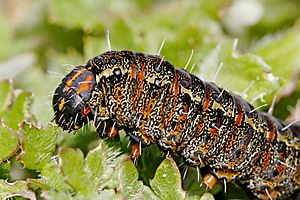 Caterpillars have been called "eating machines", and eat leaves voraciously. Most species shed their skin four or five times as their bodies grow, and they eventually pupate into an adult form. Caterpillars grow very quickly; for instance, a tobacco hornworm will increase its weight ten-thousand-fold in less than twenty days. An adaptation that enables them to eat so much is a mechanism in a specialized midgut that quickly transports ions to the lumen (midgut cavity), to keep the potassium level higher in the midgut cavity than in the blood.

Most caterpillars are solely herbivorous. Many are restricted to one species of plant, while others are polyphagous. A few, including the clothes moth, feed on detritus. Most predatory caterpillars feed on eggs of other insects, aphids, scale insects, or ant larvae. Some are cannibals, and others prey on caterpillars of other species (e.g. Hawai'ian Eupithecia ). A few are parasitic on cicadas or leaf hoppers. Some Hawai'ian caterpillars (Hyposmocoma molluscivora) use silk traps to capture snails.

Many caterpillars are nocturnal. For example, the "cutworms" (of the Noctuidae family) hide at the base of plants during the day and only feed at night. Others, such as gypsy moth (Lymantria dispar) larvae, change their activity patterns depending on density and larval stage, with more diurnal feeding in early instars and high densities. 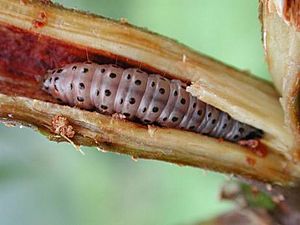 Caterpillars cause much damage, mainly by eating leaves. The cotton bollworm causes enormous losses. Other species eat food crops. Caterpillars have been the target of pest control through the use of pesticides, biological control and agronomic practices. Many species have become resistant to pesticides. Bacterial toxins such as those from Bacillus thuringiensis which are evolved to affect the gut of Lepidoptera have been used in sprays of bacterial spores, toxin extracts and also by incorporating genes to produce them within the host plants. These approaches are defeated over time by the evolution of resistance mechanisms in the insects.

Plants evolve mechanisms of resistance to being eaten by caterpillars, including the evolution of chemical toxins and physical barriers such as hairs. Incorporating host plant resistance (HPR) through plant breeding is another approach used in reducing the impact of caterpillars on crop plants.

Some caterpillars are used in industry. The silk industry is based on the silkworm caterpillar. 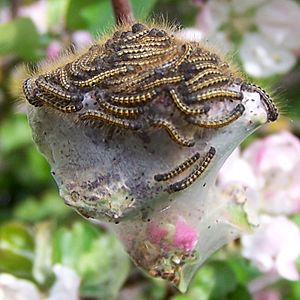 Caterpillars hatching on an apple tree in Victoria, BC, Canada

Caterpillar hair has been known to be a cause of human health problems. Caterpillar hairs sometimes have venoms in them and species from approximately 12 families of moths or butterflies worldwide can inflict serious human injuries ranging from urticarial dermatitis and atopic asthma to osteochondritis, consumption coagulopathy, renal failure, and intracerebral hemorrhage. Skin rashes are the most common, but there have been fatalities. Lonomia is a frequent cause of death in Brazil with 354 cases were reported between 1989 and 2005. Lethality ranging up to 20% with death caused most often by intracranial hemorrhage.

Caterpillar hairs have also been known to cause kerato-conjunctivitis. The sharp barbs on the end of Caterpillar hairs can get lodged in soft tissues and mucus membranes such as the eyes. Once they enter such tissues, they can be difficult to extract, often exacerbating the problem as they migrate across the membrane.

This becomes a particular problem in an indoor setting. The hairs easily enter buildings through ventilation systems and accumulate in indoor environments because their small size, which makes it difficult for them to be vented out. This accumulation increases the risk of human contact in indoor environments.

All content from Kiddle encyclopedia articles (including the article images and facts) can be freely used under Attribution-ShareAlike license, unless stated otherwise. Cite this article:
Caterpillar Facts for Kids. Kiddle Encyclopedia.