Swallowtail butterflies are large, colorful butterflies which form the family Papilionidae. There are at least 550 species, and though the majority are tropical, members of the family are found on all continents except Antarctica. The family includes the largest butterflies in the world, the birdwing butterflies of Australia (genus Ornithoptera).

As of 2005, 552 extant species have been identified which are distributed across the tropical and temperate regions. Various species inhabit altitudes ranging from sea level to high mountains, as in the case of most species of Parnassius. The majority of swallowtail species and the greatest diversity are found in the tropics and subtropical regions between 20°N and 20°S, particularly Southeast Asia, and between 20°N and 40°N in East Asia. Only 12 species are found in Europe and only one species, Papilio machaon is found in the British Isles. North America has 40 species, including several tropical species and Parnassius. 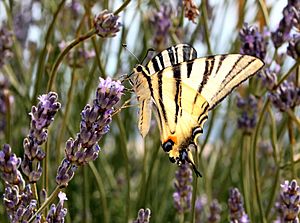 The caterpillars of various swallowtail butterfly species feed on a wide range of different plants, most depending on only one of five families: Aristolochiaceae, Annonaceae, Lauraceae, Umbelliferae (Apiaceae) and Rutaceae. By eating some of these toxic plants, the caterpillars sequester aristolochic acid which renders both the caterpillars and the butterflies of some of these as toxic, thus protecting them from predators. Similarly, the Parnassius smintheus sequesters sarmentosin from its host plant Sedum lanceolatum for protection from predators. Swallowtail tribes Zerynthiini (Parnassiinae), Luehdorfiini (Parnassiinae) and Troidini (Papilioninae), almost exclusively use the family Aristolochiaceae as their host plants.

For example, the eastern black swallowtail's main host plant in the wild is Queen Anne's lace, but they also eat garden plants in the carrot family, including carrots, parsley, dill, and fennel.

The detailed descriptions of morphological characteristics of the Papilionidae, as quoted in Bingham (1905) are as follows:

Larva. Stout, smooth or with a series of fleshy tubercles on the dorsum: sometimes with a raised fleshy protuberance (the so-called hood or crest) on the fourth segment. The second segment has a transverse opening, out of which the larva protrudes at will and an erect, forked, glandular fleshy organ that emits a strong, penetrating, and somewhat unpleasant odor.

Pupa. Variable in form but most often curved backwards. It is angulate, with the head truncate or rounded and the back of abdomen is smooth or tuberculate. It is attached by the tail, normally in a perpendicular position, and further secured by a silken girth round the middle. In Parnassius, the pupa is placed in a loose silken web between leaves.

Imago. Wings extraordinarily variable in shape. Hindwing very frequently has a tail, which may be slender, or broad and spatulate, but is always an extension of the termen at vein 4. In one genus, Armandia, the termen of the hindwing is prolonged into tails at the apices of veins 2 and 3 as well as at vein 4. Forewing (except in the aberrant genera Parnassius and Hypermnestra) with all 12 veins present and in addition a short internal vein, vein 1 a, that invariably terminates on the dorsal margin.

Stages of development of a papilionid, the giant swallowtail (Papilio cresphontes)

The key characteristics that differentiate the Papilionidae from the other butterfly families are:

Swallowtail butterflies practice Batesian mimicry, a behavior in which the butterflies' appearance closely resemble that of distasteful species that prevents predation. Swallowtails differ from many animals that practice mimicry. The tiger swallowtail butterfly (Papilio glaucus), exhibits a female-limited polymorphism for Batesian mimicry and others, such as the Canadian tiger swallowtail (Papilio canadensis) do not display any form of mimicry.

All content from Kiddle encyclopedia articles (including the article images and facts) can be freely used under Attribution-ShareAlike license, unless stated otherwise. Cite this article:
Swallowtail butterfly Facts for Kids. Kiddle Encyclopedia.