The superfamily Papilionoidea (from the genus Papilio, meaning "butterfly") has all the butterflies except for the skippers, which are in the superfamily Hesperioidea, and the moth-like Hedyloidea.

The members of the Papilionoidea may be distinguished by the following combination of characters: 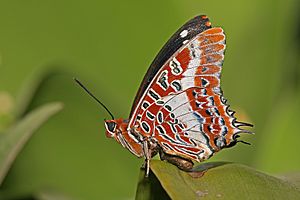 The five families of Papilionoidea are:

All content from Kiddle encyclopedia articles (including the article images and facts) can be freely used under Attribution-ShareAlike license, unless stated otherwise. Cite this article:
Papilionoidea Facts for Kids. Kiddle Encyclopedia.