The Lycaenidae are the second-largest family of butterflies, with about 6000 species worldwide. They are also called gossamer-winged butterflies.

The family includes many beautiful species. Some, like the Palos Verdes blue, are critically endangered. The Lycaenids were favourites of the Russian novelist and lepidopterist Vladimir Nabokov. 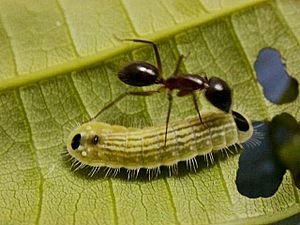 Lycaenids are diverse in their food habits and apart from phytophagy, some of them are entomophagous feeding on aphids, scale insects, and ant larvae. Some lycaenids even exploit their association with ants by inducing ants to feed them by regurgitation, a process called trophallaxis. Not all lycaenid butterflies need ants, but about 75% of species associate with ants, a relationship called myrmecophily. These associations can be mutualistic, parasitic, or predatory depending on the species.

In some species, larvae are attended and protected by ants while feeding on the host plant, and the ants receive sugar-rich honeydew from them, throughout the larval life, and in some species during the pupal stage. In other species, only the first few instars are spent on the plant, and the remainder of the larval lifespan is spent as a predator within the ant nest. It becomes a parasite, feeding on ant regurgitations, or a predator on the ant larvae. The caterpillars pupate inside the ant's nest and the ants continue to look after the pupa. Just before the adult emerges the wings of the butterfly inside the pupal case detach from it, and the pupa becomes silvery. The adult butterfly emerges from the pupa after three to four weeks, still inside the ant nest. The butterfly must crawl out of the ant nest before it can expand its wings.

Several evolutionary adaptations enable these associations and they include small glands on the skin of the caterpillars called "pore cupola organs". Caterpillars of many species, except those of the Riodininae, have a gland on the seventh abdominal segment that produces honeydew and is called the "dorsal nectary gland" (also called "Newcomer's gland"). An eversible organ called the "tentacular organ" is present on the eighth abdominal segment (third segment of thorax in the Riodininae) and this is cylindrical and topped with a ring of spikes and emits chemical signals which are believed to help in communicating with ants. 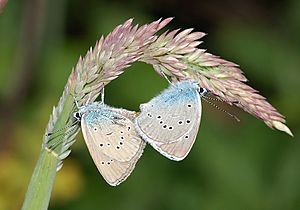 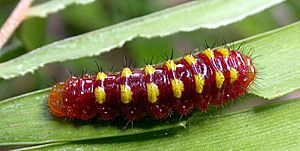 Caterpillar of the Atala (Eumaeus atala) 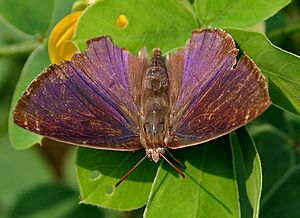 The tribe Aphnaeini of the subfamily Theclinae which includes the genus Chrysoritis is sometimes listed as separate subfamily.

The fossil genus Lithodryas is usually (but not unequivocally) placed here; Lithopsyche is sometimes placed here but sometimes in the Riodininae.

All content from Kiddle encyclopedia articles (including the article images and facts) can be freely used under Attribution-ShareAlike license, unless stated otherwise. Cite this article:
Lycaenidae Facts for Kids. Kiddle Encyclopedia.