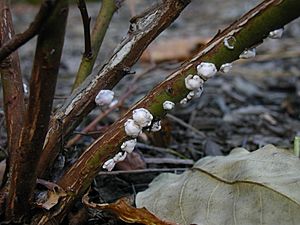 The scale insects are small bugs of the order Hemiptera. They are the superfamily Coccoidea. There are about 8,000 described species of scale insects. They are ectoparasites of plants, like most bugs. They sit on the outside of plants, stick their mouthparts inside, and suck up the plant sap.

Adult female scales usually do not move: they are permanently attached to the plant they have parasitized. They secrete a waxy coating for defence. The coating makes them look like fish scales, hence their common name.

Males and females are quite different form each other. This is sexual dimorphism. Female scale insects keep their juvenile shape even when sexually mature (a condition known as neoteny). Adult males usually have wings (depending on their species) but never feed, and die within a day or two.

The details of their reproductive systems vary greatly between species. Three types of hermaphroditism are known, and at least seven forms of parthenogenesis.

Their young, known as crawlers, lose the use of their legs if they are female, and stay put for life. Only the males keep their legs and use them in seeking females for mating.

Many scale insects are serious crop pests. The waxy covering protects them from contact insecticides. However, scales may be controlled. Horticultural oils suffocate them, and systemic pesticides poison the sap of the host plants. Biological control agents such as tiny parasitoid wasps and Coccinellid beetles also work on them. Insecticidal soap may also be used against scales.

All content from Kiddle encyclopedia articles (including the article images and facts) can be freely used under Attribution-ShareAlike license, unless stated otherwise. Cite this article:
Scale insect Facts for Kids. Kiddle Encyclopedia.