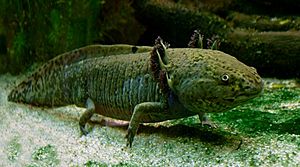 The axolotl is a neotenous salamander, retaining gills throughout its life.

Neoteny is a type of heterochrony where bodily development is slowed, but sexual development goes on at the same rate. This results in a sexually mature juvenile or larval form. A classic example is the Axolotl.

It has often been suggested that the human species is, at least to some extent, an example of neoteny. These features of adult humans are different from those of adult great apes, but more similar to those of juvenile apes:

All content from Kiddle encyclopedia articles (including the article images and facts) can be freely used under Attribution-ShareAlike license, unless stated otherwise. Cite this article:
Neoteny Facts for Kids. Kiddle Encyclopedia.