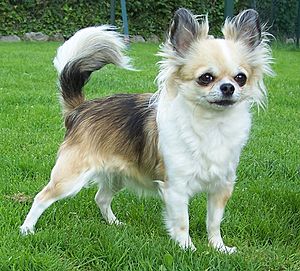 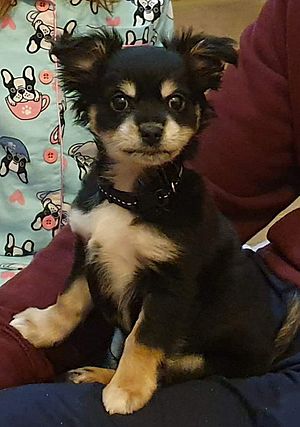 Gavin the Chihuahua. He is a Chihuahua crossed with a Shih Tzu.

A chihuahua is a very small kind of dog and is bred to be a pet.

It is the smallest breed of dog, and is named after the Mexican state of Chihuahua.

They can reach a height of 6-9 inches (12.7–20.3 cm) and a weight of 2–6 pounds (0.9–2.7 kg). Chihuahuas can have a long or short coat, and come in many different colors. These are black, white, beige, brown, and dark brown. They only need grooming once a week if short coat or it may be twice if you have a long coat. Chihuahuas can have up to six puppies because of their small bodies.

The Chihuahua's start goes back to Mexico as the descendants of the Techichi, a long haired and silent dog. The Techichi was liked by the Toltec people, one of the indigenous (original) people of Mexico. Chihuahuas are believed to have been made by breeding the Techichi and Chinese Crested Dogs (a type of small hairless dog) to form today's Chihuahuas.

Another possible start for Chihuahuas was the breeding of Techichis with Spanish terriers, which were well liked at the time and were known for their small body and black and tan colors. Mating with another type of dog increased the loudness of the Techichi's bark while making it smaller.

Chihuahuas were named after the Chihuahua state in Mexico. The word Chihuahua comes from the Na'huatl word "xicuagua", which means "sandy, dry place". 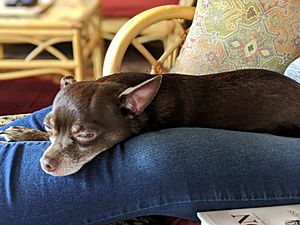 How a Chihuahua behaves depends on the genetic temperament of their parents and grandparents. Their small size makes them delicate and vulnerable to injuries and attacks from larger animals. Like all dogs, they benefit from appropriate socialization and training. Chihuahuas tend to learn better when being rewarded positive reinforcement, such as a treat or praise. With the proper training a Chihuahua needs, this dog can be extremely intelligent. The way a dog is trained will influence its behavior.

Chihuahuas can be easily frightened or provoked to attack, so are generally unsuitable for homes with small children. The breed tends to be fiercely loyal to one particular person and in some cases may become overprotective of the person, especially around other people or animals, and tend to have a "clannish" nature, often preferring the companionship of other Chihuahuas or Chihuahua mixes over other dogs. These traits generally make them unsuitable for households with children who are not patient and calm.

Because Chihuahuas get cold easily they tend to love their dens and will often burrow themselves in pillows, clothes hampers, and blankets. They are often found under the covers or at the bottom of the bed, deep in the dark and safety of what they perceive as their den. Chihuahuas also enjoy time in sunlight. Chihuahuas sometimes act like cats and climb up to the highest point on a couch, usually on top of the pillows, and curl up into a ball. Chihuahuas have their own type of personality. They tend to be alert. Chihuahuas typically do not show fear; even though they are a smaller breed, they do not view their size as a disadvantage.

All content from Kiddle encyclopedia articles (including the article images and facts) can be freely used under Attribution-ShareAlike license, unless stated otherwise. Cite this article:
Chihuahua (dog) Facts for Kids. Kiddle Encyclopedia.