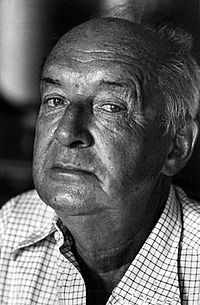 Vladimir Nabokov (April 22, 1899 – July 2, 1977) was a Russian-American author. He wrote his first books in Russian, and after he moved to the United States, he wrote in English. His most famous book is Lolita, but others have also become famous, such as Pnin, Pale Fire, and Ada or Ardor.

Nabokov was born in Saint Petersburg, Russia, the first of five children. In 1919, he and his family went to Europe. In 1945, he became an American citizen. He died in Montreux, Switzerland.

Nabokov's father was a lawyer and politician. As a child, Vladimir learned Russian, English, and French. After the October Revolution, the family moved a few times, but settled in Berlin in 1920. Two years later, his father was shot and killed by mistake, because he had blocked the person the gunman was trying to murder. His mother and sister moved to Prague, but Vladimir stayed in Berlin. He wrote for other Russians who had left Russia to live there. He met Véra Slonin, a woman from a Jewish-Russian family, in 1923. They married in 1925. In 1934, they had their only child, Dmitri.

In 1937, Nabokov started to look for another job. He left for France that year, and his family followed. They all fled to America in 1940, except his brother Sergei, who died in a Nazi concentration camp.

Nabokov was an expert on butterflies. As a child he had read books by entomologist Maria Sibylla Merian which he found in the attic of his family's country home in Vyra.

During the 1940s, he was a research fellow in zoology. He organized the butterfly collection of the Museum of Comparative Zoology at Harvard University. His specialty was the tribe Polyommatini of the family Lycaenidae.

The genus Nabokovia was named after him in honor of this work, as were a number of butterfly and moth species (e.g. many species in the genera Madeleinea and Pseudolucia have names alluding to Nabokov or names from his novels). In 1967, Nabokov commented: "The pleasures and rewards of literary inspiration are nothing beside the rapture of discovering a new organ under the microscope or an undescribed species on a mountainside in Iran or Peru. It is not improbable that had there been no revolution in Russia, I would have devoted myself entirely to lepidopterology and never written any novels at all".

All content from Kiddle encyclopedia articles (including the article images and facts) can be freely used under Attribution-ShareAlike license, unless stated otherwise. Cite this article:
Vladimir Nabokov Facts for Kids. Kiddle Encyclopedia.