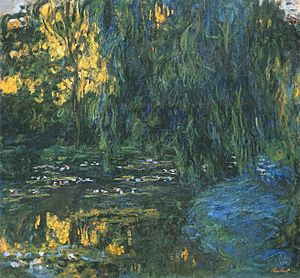 Modernist literature scholar David Thorburn saw connections between literary style and impressionist painters such as Claude Monet. Modernist writers, like Monet's paintings of water lilies, suggested an awareness of art as art, rejected realistic interpretations of the world and dramatized "a drive towards the abstract".

Modernist literature is the literary form of modernism. It does not mean "modern" in the sense of recent in time.

Literary modernism has its origins in the late 19th and early 20th centuries, mainly in Europe and North America. Modernism is characterized by a break with traditional styles of poetry and verse. Modernists experimented with literary form and expression. Ezra Pound's maxim was "Make it new". The horrors of the First World War had an effect. Thinkers such as Sigmund Freud and Karl Marx were influential.

All content from Kiddle encyclopedia articles (including the article images and facts) can be freely used under Attribution-ShareAlike license, unless stated otherwise. Cite this article:
Modernist literature Facts for Kids. Kiddle Encyclopedia.