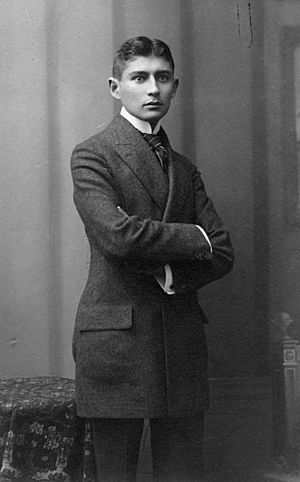 Franz Kafka (born Prague July 3, 1883 – died near Vienna June 3, 1924) was a Czech-born, German-speaking writer. His best known works are The Metamorphosis and the novels The Trial and The Castle. Not much of his work was published during his lifetime. He asked his friend to make sure that all his writings which were not published, including his three novels, would be destroyed when he died. Fortunately his friend did not destroy them, and they were published after Kafka’s death.

Kafka’s writings are about the frightening world around him which he often did not understand. A typical situation in his books might be someone who has gone somewhere to take a message, but he does not know what the message is or who it is for. The people he meets confuse him even more. Sometimes, when people find themselves in strange, nightmarish situations like this, they are described as Kafkaesque situations.

Kafka was born into a middle-class Jewish family. His father was a merchant. He was very strict and unkind to his family. Kafka’s stories often have fathers who are very brutal and unkind. Kafka spent most of his life living at home. He never married or became free from his parents. He felt that he had no will of his own. He wrote about people who are dominated by some mysterious power. He found it difficult to make friends, he hated his job and everyone around him. He often felt that he belonged nowhere. He was German-speaking but lived in a Czech-speaking country (Bohemia, part of the Austro-Hungarian Empire, now part of the Czech Republic). He was different because he was Jewish, but he did not become part of the Jewish community either. He said that he was a socialist and an atheist, but although he was interested in politics he never took part in political activity. He supported Czechs who wanted to rule their own country and let their culture flourish, but he was not one of them because he himself was brought up in a German culture.

It was while he was studying law at the University of Prague that he met Max Brod who was to become his friend. Brod was a writer himself, and he later wrote a biography of Kafka.

After his studies Kafka took a job in an insurance company. He was good at his job although he hated it. He found the office work boring, and he spent his nights writing. In 1917 he got tuberculosis. Gradually he became more and more ill. He had to retire in 1922. He spent some time in hospital. He died in Klosterneuburg in 1924.

Several publishers realized how good Kafka’s writings were and asked him whether they could publish his works. Kafka reluctantly let a few things be published. One of these works was a story called Metamorphosis (German: Die Verwandlung). It is about a man called Gregor Samsa (the name “Samsa” means "loner" or "lonely"). Gregor wakes up one morning to find he has changed into a giant cockroach. His family becomes ashamed of him and they stop looking after him so that he slowly dies. Stories like these are a kind of fable. They are full of strange and frightening situations.

His novel Amerika (published in 1927) is about a man who arrives in America looking for a father figure to protect him. He is quiet and timid and other people use him. In the end he dies.

In The Castle (German: Das Schloss) a man who is simply called “K” (the first letter of “Kafka”) arrives at a castle saying that he has been given a job there, but the people there say they have not been told about his appointment. Kafka never finished the novel, but Max Brod says that Kafka was going to end it with K receiving permission to stay at the castle just as he was dying. The German word “Schloss” has two meanings: “castle” and “lock”. K becomes locked (trapped) in this strange situation.

At the time of his death only a few people understood Kafka’s writings. Max Brod saved all the unpublished books which would otherwise have been lost. Kafka is now thought of as one of the most important writers of the 20th century. His works had a lot of influence on German literature.

All content from Kiddle encyclopedia articles (including the article images and facts) can be freely used under Attribution-ShareAlike license, unless stated otherwise. Cite this article:
Franz Kafka Facts for Kids. Kiddle Encyclopedia.