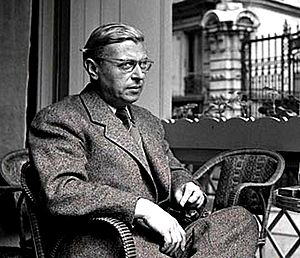 Jean-Paul Sartre (1905-1980), one of the leading existentialist philosophers.

Existentialism is a philosophical way of thinking. It sees humans, with will and consciousness, as being in a world of objects which do not have those qualities. The fact that humans are conscious of their mortality, and must make decisions about their life is what existentialism is all about.

It was started by the Danish philosopher Søren Kierkegaard (1813–1855). As it developed in the 20th century, it was an atheistic philosophy, although existentialism's founder, Søren Kierkegaard, was a deeply religious man. Most of its main thinkers and writers were in Europe. Sartre, for example, spent most of the Second World War in a German prison camp, reading the philosophy of Heidegger. When he came out he gave a lecture called Existentialism and humanism. This early lecture may be easier to read than his later work.

Many religions and philosophies (ways of thinking about the world) say that human life has a meaning (or a purpose). But people who believe in existentialism think that the world and human life have no meaning unless people give them meaning: "existence precedes [is before] essence". This means that we find ourselves existing in the world, and then we give ourselves meaning, or 'essence'. As Sartre said, "We are condemned to be free". This means that we have no choice but to choose, and that we have full responsibility for our choices.

Existentialists believe that our human 'essence' or 'nature' (way of being in the world) is simply our 'existence' (being in the world). More simply put, the 'essence' of a human, or what makes a human a 'human', is not due to nature or uncontrollable circumstances; rather, human essence is really just what we choose to make it. This means that the only nature we as humans have is the nature we make for ourselves. As a result of this, existentialists think that the actions or choices that a person makes are very important. They believe that every person has to decide for themselves what is right and wrong, and what is good and bad.

People who believe in existentialism ask questions like "what is it like to be a human (a person) in the world?" and "how can we understand human freedom (what it means for a person to be free)?" Existentialism is often connected with negative emotions, such as anxiety (worrying), dread (a very strong fear), and mortality (awareness of our own death).

Existentialism is sometimes confused with nihilism. It is different from nihilism, but there is a similarity. Nihilists believe that human life does not have a meaning (or a purpose) at all; existentialism says that people must choose their own purpose.

All content from Kiddle encyclopedia articles (including the article images and facts) can be freely used under Attribution-ShareAlike license, unless stated otherwise. Cite this article:
Existentialism Facts for Kids. Kiddle Encyclopedia.