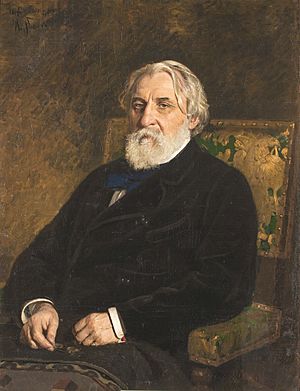 The novelist Ivan S. Turgenev made the term nihilism popular.

Nihilism comes from the Latin nihil, or nothing. It is the belief that values are falsely invented. The term 'nihilism' can also be used to describe the idea that life, or the world, has no distinct meaning or purpose. Nihilists believe that there are no true morals. Many people think of the German philosopher Friedrich Nietzsche when they think about nihilism, because he said that morals were invented. But in his books, Nietzsche said that people needed to create their own morals to get over nihilism.

Mikhail Bakunin’s (1814–1876) Reaction in Germany (1842) included this passage: "Let us therefore trust the eternal Spirit which destroys and annihilates only because it is the unfathomable and eternal source of all life. The passion for destruction is a creative passion, too!" The term was made popular by Ivan Turgenev's novel Fathers and Sons (1862). Bazarov, the hero in it, was a nihilist.

Nihilism was the basis of much revolutionary terrorism. It was taken up by Sergei Nechaev, a Russian who wrote a pamphlet that influenced Lenin. Dostoyevsky was a member of a nihilist group in his 20s. He served ten years in exile as a consequence. His novel Devils (or The Possessed) deals with Nechaev. His famous novel Crime and Punishment is also on that theme.

The assassination of the Tsar Alexander II (13 March 1881) by a series of bombs, had long been planned by nihilists. It resulted in the crushing of the nihilist movement.

All content from Kiddle encyclopedia articles (including the article images and facts) can be freely used under Attribution-ShareAlike license, unless stated otherwise. Cite this article:
Nihilism Facts for Kids. Kiddle Encyclopedia.