Adolphe Jean Menjou (February 18, 1890 – October 29, 1963) was an American actor. His career spanned both silent films and talkies. He appeared in such films as Charlie Chaplin's A Woman of Paris, where he played the lead role; Stanley Kubrick's Paths of Glory with Kirk Douglas; Ernst Lubitsch's The Marriage Circle; The Sheik with Rudolph Valentino; Morocco with Marlene Dietrich and Gary Cooper; and A Star Is Born with Janet Gaynor and Fredric March, and was nominated for an Academy Award for The Front Page in 1931. 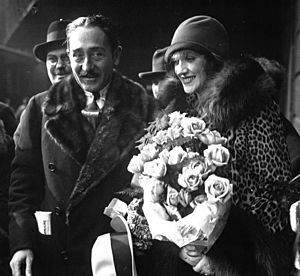 All content from Kiddle encyclopedia articles (including the article images and facts) can be freely used under Attribution-ShareAlike license, unless stated otherwise. Cite this article:
Adolphe Menjou Facts for Kids. Kiddle Encyclopedia.