Marion Mitchell Morrison (born Marion Robert Morrison; May 26, 1907 – June 11, 1979), known professionally as John Wayne and nicknamed "The Duke", was an American actor and filmmaker. An Academy Award-winner for True Grit (1969), Wayne was among the top box office draws for three decades.

Wayne's career took off in 1939, with John Ford's Stagecoach making him an instant star. He went on to star in 142 motion pictures altogether. Biographer Ronald Davis said, "John Wayne personified for millions the nation's frontier heritage. Eighty-three of his movies were Westerns, and in them he played cowboys, cavalrymen, and unbeatable loners."

He appeared with many important Hollywood stars of his era, and his last public appearance was at the Academy Awards ceremony on April 9, 1979. 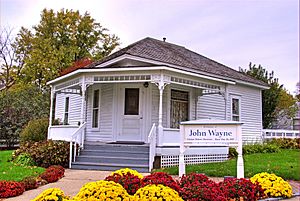 The house in Winterset, Iowa, in which Wayne was born in 1907

Born with the name Marion Robert Morrison in Winterset, Iowa. Wayne was Scotch Irish on his father and Irish on his mother's side. During Wayne's childhood, he moved to Palmdale, California then to Glendale, California. While attending Wayne started working in small local movie companies. And also started playing football in high school and participated in the Glendale school team before being recruited by the University of Southern California (USC).

Wayne was nominated for an Academy Award for Sands of Iwo Jima. One of his most important roles was that of Ethan Edwards a desperate man looking for his niece kidnapped by Comanche in the 1956 western movie The Searchers, directed by John Ford.

The Alamo was nominated for several Academy Awards. It won the award for Best Sound. Wayne received an Academy Award and Golden Globe Award for his role in True Grit. His last role was in The Shootist. 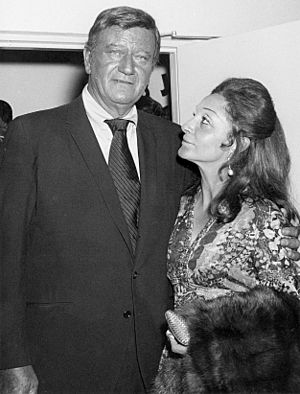 Wayne was married three times and divorced twice. His three wives were Josephine Alicia Saenz, Esperanza Baur, and Pilar Pallete. He had four children with Josephine and three more children with Pilar.

Several of Wayne's children entered the film and television industry; Wayne's son Ethan was billed as John Ethan Wayne in a few films, and played one of the leads in the 1990s update of the Adam-12 television series.

He was a Freemason, a Master Mason in Marion McDaniel Lodge No. 56 F&AM, in Tucson, Arizona. He became a 32nd Degree Scottish Rite Mason and later joined the Al Malaikah Shrine Temple in Los Angeles. He became a member of the York Rite. During the early 1960s, John Wayne traveled extensively to Panama, during which he purchased the island of Taborcillo off the main coast. It was sold by his estate at his death.

Wayne's yacht, the Wild Goose, was one of his favorite possessions. He kept it docked in Newport Harbor and it was listed on the U.S. National Register of Historic Places in 2011. 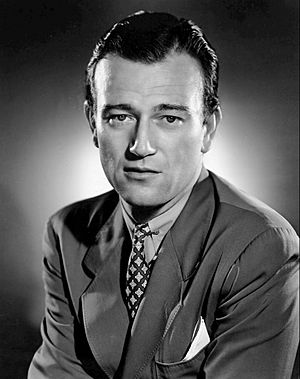 John Wayne from the 1940 film The Long Voyage Home

He had been a chain smoker of cigarettes since young adulthood and was diagnosed with lung cancer in 1964. He underwent successful surgery to remove his entire left lung and four ribs. Despite efforts by his business associates to prevent him from going public with his illness for fear that it would cost him work, Wayne announced he had cancer and called on the public to get preventive examinations. Five years later, Wayne was declared cancer-free. Wayne has been credited with coining the term "The Big C" as a euphemism for cancer.

Although he enrolled in a cancer vaccine study in an attempt to ward off the disease, Wayne died of stomach cancer on June 11, 1979, at the UCLA Medical Center. His body was buried in the Pacific View Memorial Park Cemetery in Corona del Mar, Newport Beach. 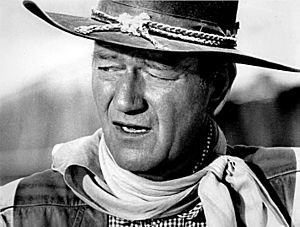 Wayne's long lasting status as an iconic American was formally recognized by the U.S. government in the form of the two highest civilian decorations. On May 26, 1979, he was awarded the Congressional Gold Medal. Hollywood figures and American leaders from across the political spectrum, including Maureen O'Hara, Elizabeth Taylor, Frank Sinatra, Mike Frankovich, Katharine Hepburn, General and Mrs. Omar Bradley, Gregory Peck, Robert Stack, James Arness, and Kirk Douglas, testified to Congress in support of the award.

Wayne was posthumously (after death) awarded the Presidential Medal of Freedom on June 9, 1980, by President Jimmy Carter. In 1998, he was awarded the Naval Heritage Award by the US Navy Memorial Foundation for his support of the Navy and military during his film career. In 1999, the American Film Institute (AFI) named Wayne 13th among the Greatest Male Screen Legends of Classic Hollywood cinema.

Various public locations are named in honor of Wayne, including the John Wayne Airport in Orange County, California, where a nine-foot bronze statue of him stands at the entrance; the John Wayne Marina near Sequim, Washington; John Wayne Elementary School (P.S. 380) in Brooklyn, New York, which boasts a 38-foot mosaic mural entitled "John Wayne and the American Frontier". 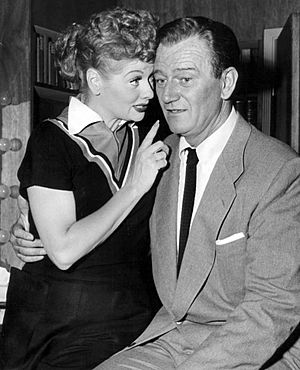 A larger than life-size bronze statue of Wayne atop a horse was erected at the corner of La Cienega Boulevard and Wilshire Boulevard in Beverly Hills, California, at the former offices of the Great Western Savings and Loan Corporation, for which Wayne had made a number of commercials. In the city of Maricopa, Arizona, part of Arizona State Route 347 is named John Wayne Parkway, which runs through the center of town.

Wayne rose beyond the typical recognition for a famous actor to that of an enduring icon who symbolized and communicated American values and ideals. By the middle of his career, Wayne had developed a larger-than-life image. 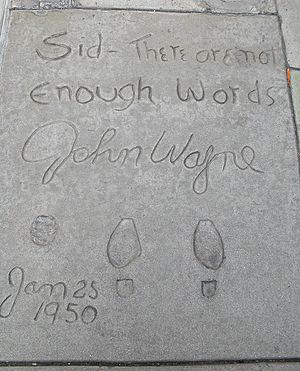 Wayne's rise to being the model of a movie war hero began to take shape four years after World War II, when Sands of Iwo Jima (1949) was released. His footprints at Grauman's Chinese theater in Hollywood were laid in concrete that contained sand from Iwo Jima. His status grew so large and legendary that when Japanese Emperor Hirohito visited the United States in 1975, he asked to meet John Wayne, the symbolic representation of his country's former enemy. Likewise when Soviet leader Nikita Khrushchev visited the United States in 1959, he made two requests: to visit Disneyland and meet Wayne.

The John Wayne Cancer Foundation was founded in 1985 in honor of John Wayne, after his family granted the use of his name for the continued fight against cancer. The foundation's mission is to "bring courage, strength, and grit to the fight against cancer". The foundation provides funds for innovative programs that improve cancer patient care, including research, education, awareness, and support.

Between 1926 and 1976, Wayne appeared in over one hundred seventy films, and became one of America's biggest box office stars. Only Clark Gable sold more tickets than Wayne.

All content from Kiddle encyclopedia articles (including the article images and facts) can be freely used under Attribution-ShareAlike license, unless stated otherwise. Cite this article:
John Wayne Facts for Kids. Kiddle Encyclopedia.